Brothers Nicolai and Rasmus Hojgaard were commanding in Denmark’s one-shot victory over the United States in the World Amateur Team Championship on Friday to help their country win the Eisenhower Trophy for the first time. The Danes posted a 39-under to win in their 25th attempt.

Reigning European Amateur champion Nicolai Hojgaard posted a final round 7-under 66, while brother Rasmus fired a 6-under 67 for a team total of 13-under on the par-73 O’Meara Course at Carton House Golf Club near Dublin. John Axelsen scored a non-counting 69. 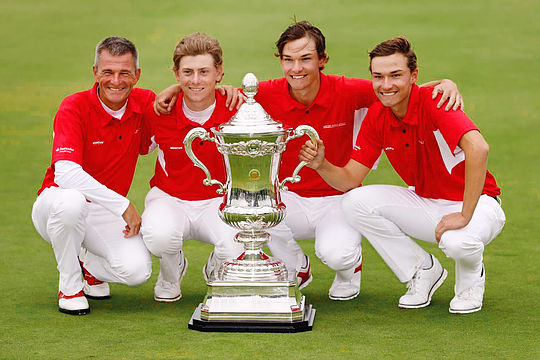 Denmark went one place better than its silver medal position in 2010.

“It means a lot,” said six-time Danish captain Torben Nyehuus. “Everybody is watching. It’s just amazing. I was with the team in 2010 when we came in second, so this is just amazing. It’s pretty nice to go one better.”

Nicolai notched five birdies in his final nine holes and Rasmus secured three as they took the lead from a tightly-packed leaderboard. Four teams, Denmark, USA, Spain and New Zealand, were tied at 34-under as the last groups made the turn.

The USA used a strong finish by University of Texas freshman and 2018 US Amateur semifinalist Cole Hammer (7-under 66) and University of Southern California senior Justin Suh (4-under 69) to pass Spain for the silver medal at 38-under-par.

It’s the 26th time Team USA has finished first, second or third in 31 editions of these championships.

“I’m really proud of my guys,” said USA captain Tom O’Toole. “They played their hearts out. Like we said most of the week, we didn’t get some putts to fall but a lot of teams can say that. You can’t say enough about our guys’ effort. Super.”

Spain took the bronze medal at 36-under with New Zealand, which held the lead through 36 and 54 holes, finishing fourth, followed by Norway, Italy and Thailand tied for fifth. England claimed eighth position with Canada in ninth and host Ireland and Germany rounding out the top-10.

The Australian team finished in a distant tie for 12th.

Min Woo Lee was the best of the Aussies firing rounds of 72-68-66-68 finishing at 16-under, to be just seven shots off the individual low scorer, Spain’s Alejandro Del Rey who finished at 23-under.