Soren Kjeldsen and Thorbjorn Olesen have combined to win their first-ever golf World Cup for Denmark with a four-shot triumph at Kingston Heath.

The Danes began the day with a four-shot cushion and seven birdies, including one at the last when Olesen curled in a 20-foot putt, combined with a single bogey were enough to hand them victory on 20-under.

China, playing in front and needing several time warnings from officials, got within one shot of the Danish before a six-birdie back nine – including a long putt drained by Olesen on the 18th – sealed the final-round 66 for a four-shot victory.

“It’s been an absolutely incredible week. I’ve enjoyed the camaraderie with Thorbjorn. I’ve been so impressed by his game, his attitude, and I think we’ve had a great time and that reflects in the result.” 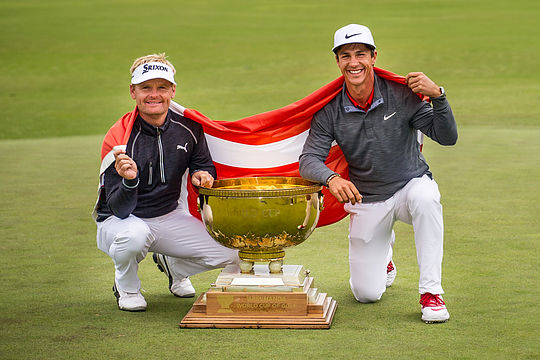 Team USA of Rickie Fowler and Jimmy Walker finished in a tie for second with China’s Wu Ashun and Li Haotong and Frenchmen Victor Dubuisson and Romain Langasque.

“I felt we both kind of continued to play better and better as the week went on,” said Fowler.

“Unfortunately, we didn’t have our best, but I felt like we fought and did a good job with alternative shot. Get a few more putts to go in and we’ll be in good shape.”

Australians Marc Leishman and Adam Scott fired on the final day, shooting a 65 on Sunday to finish in a tie for ninth at 11 under.

“It was nice to finally see a few putts drop and some red numbers on the leaderboard. It’s unfortunate that we couldn’t start that on Thursday,” Leishman said.

Adam Scott also was pleased with the way the Aussies finished, yet admitted they had left their charge a little too late.

“Even daring to dream we’d birdie the whole back nine it wasn’t going to be enough,” said Scott, who had paired with Jason Day to win the previous edition of the World Cup at Royal Melbourne in 2013.

“We needed a faster start. We didn’t get the start that we wanted and we then had to play catch-up golf and that’s difficult given how well the other teams played.”

Kjeldsen and Olesen made their move with a 12-under 60 in the other round of best-ball competition on Friday to set their momentum and ultimately the foundation for victory.

During their final round they also remained resolved and played smart but aggressive golf. Olesen’s hot putter delivered birdies at the 13th, 14th and 15th holes to give the Danish some breathing space as others like China, France and the US rallied.

“The second round was where we made our move,” said Olesen.

“It was tough conditions during the first two rounds, but me and Soren have been great this week with just your mental strength. We’ve been very, very good keeping calm and playing our own game and we’ve both been playing well.”