The opening round of the British Amateur being held at The Island and Portmarnock Golf Club in Ireland sees Aiden Didone and Kyle Michel the best of the 10 man Australian contingent, with the pair currently in a share of 32nd position after a round of 1-over-par.

Ayoub Ssouadi from Morocco, Anton Albers from Germany and England’s Harry Hall share the first round lead at 4-under-par in the two round stroke qualification series in the first stage of the championship, which sees the 64 lowest scores and ties over the 36 holes progressing to the match stage and championship proper which starts Wednesday through to Saturday at Portmarnock. 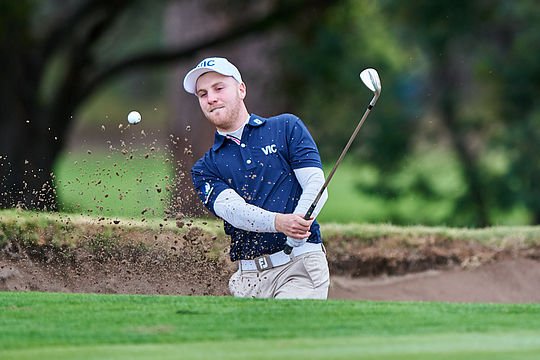 It is only the second time the British Amateur has been hosted at Portmarnock following the previous staging in 1949. The Island is co-hosting for the first time in its history.

Scoring was challenging for the 288 player filed from 37 countries during the opening rounds with breezy conditions lashing the links layouts.

The leading world ranked player in the field, Australia’s David Micheluzzi, who is ranked sixth in the world, shot a 74 at Portmarnock to be in a share of 52nd position, while Akshay Bhatia from the United States of America, world-ranked seventh, carded a 76.

At present the 36 hole cut mark is estimated to be 5 over par.

The Champion will receive full exemption to The 2019 Open Championship at Royal Portrush, The 2020 US Open at Winged Foot and, by tradition, The 2020 Masters Tournament, providing he is still an amateur at the time and throughout the respective Championship.

Two Australians have won the British Amateur Championship since it was first played in 1885, Victorians Doug Bachli in 1954 and Bryden Macpherson in 2011.

Jim Ferrier and Tim Stewart are other Australians to have made the championship final, along with Dylan Perry, with Ferrier losing to Scotland’s Hector Thomson in 1936, Stewart going down to American Drew Weaver in 2007 and Perry lossing to England’s Harry Ellis in 38 holes in 2017.