It’s tough to know where to start with the superlatives in a week where Dustin Johnson dominated the world’s best players on such an epic scale.

Not only did Johnson win the Northern Trust, and the first of three events in the FedExCup Playoff events, he won by 11 shots and along the way he missed shooting a round of 59 by just a shot in his second round.

On top of that he returns to World No.1 for the sixth time in his career and also leapfrogs Justin Thomas as the FedExCup points leader with just two events left in the season.

“I really, really hit it well on Thursday. I didn’t really make a lot of putts, but I really went and worked hard on my putting on Thursday afternoon, and it paid off. Obviously I rolled it really nicely on Friday, Saturday and Sunday,” said an understated Johnson.

“I’ve got myself into a really good position going into East Lake and next week, too. Next week is a big tournament and I’m looking forward to going and playing Olympia Fields.” 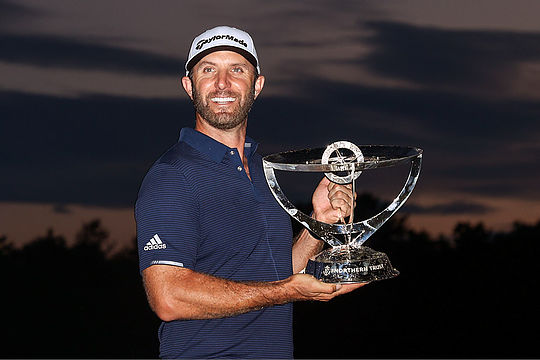 Unsurprisingly Tiger Woods owns the largest winning margin of the modern era with his 15 shot win at the 2000 U.S. Open Championship over Ernie Els and Miguel Ángel Jiménez.

Johnson’s 30-under ties with Jordan Spieth as the second best score-to-par total since 1950 with only Ernie Els going one better at the 2003 Mercedes Championship for his record 31-under total of 261.

Harris English shot a 19-under but had to settle for second place and his 6th top-10 finish this season. English moves up 21 places to 6th in the FedExCup race.

Daniel Berger was next best in outright third on 18-under followed another shot back by Kevin Kisner and Scottie Scheffler in a share of 4th place.

Scheffler made history on Friday becoming just the 12th person ever on the PGA Tour to card a sub-60 round following his 12-under 59.

Davis, shared the lead on Thursday and looked good again on Friday but weekend rounds of 72 and 73 undid his good work and the Sydney-sider plummeted 20 places on Sunday and at 84th on the FedExCup points tally his season ended along with Matt Jones at 95th.

Jason Day and Marc Leishman sat out the weekend but both qualified to play in this week’s $9.5 million BMW Championship at Olympia Fields CC in Illinois.