If anyone was wondering whether LIV Golf could match the excitement of the PGA Tour, Dustin Johnson’s 18-metre eagle putt to win on the first hole of a three-man playoff certainly put that thought to rest.

Johnson’s win over LIV Golf debutants, Anirban Lahiri and Joaquin Niemann, was his first victory since defecting to the rebel tour and his first trophy on any tour in over 18 months.

“I wanted to finally get my first victory out here,” said Johnson, who takes home a lazy US$4 million along with another US$750,000 for his share of the $3 million team prize as part of the 4 Aces.

“I feel like I’ve had a really good chance to win every single week, just haven’t played as well on Sunday as I’d like to. But played really nicely today.”

Despite the heroics, Johnson’s eagle putt was very lucky to find the bottom of the hole. The former World No.1 had put enough pace on it to end up a worrying distance behind the hole had it missed anywhere but dead-centre of the hole. But as we’ve seen so many times, those are the types of breaks that win golf tournaments. 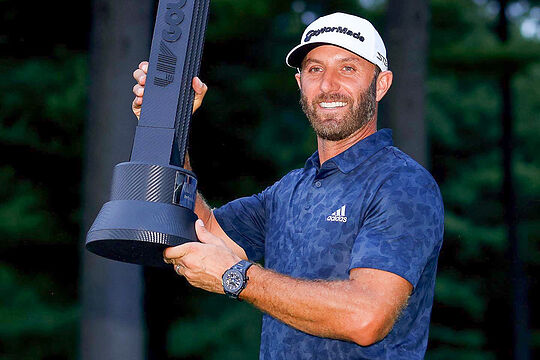 With just a handful of holes to go, it looked like LIV debutant Cameron Smith might bring his winning ways to the rebel league. Before disaster struck, the Queenslander was in a share of the lead on 15-under thanks to a round which, at that stage, included six birdies and an eagle.

However, a wayward drive into dense scrub on his penultimate hole saw Smith drop back a shot and with just a par 3 left to scramble back into the lead, Smith saw his chances of claiming the US$4 million prize evaporate before his eyes. The British Open champ closed with an impressive 7-under 63 and one shot off the pace.

“I thought I was really out of it [after the round two], I played pretty poorly, but to get out here today and to do what I did was pretty cool,” said Smith. “It was just an unfortunate bogey there on the second last hole. It cost me a spot in the playoff.”

He wasn’t the only one either with Lee Westwood playing some of the best golf of his life to notch up a final round of 8-under 62. The 49-year-old was also tied for the lead with just a few holes to play but bogeys at two of his last three holes saw him finish one shot short of the playoff alongside Smith on 14-under and in a tie for fourth place.

Jed Morgan, Matt Jones and Marc Leishman, who was playing in his first LIV event, were next best of the Australians in a share of 26th place on 4-under. Wade Ormsby was the last over the line in outright 43rd on 4-over.

Next up on the calendar is LIV Golf Chicago from September 16-18 before Norman’s men head to Bangkok for the LIV Golf Invitational Thailand (October 7-9) and Jeddah, Saudi Arabia in mid-October.

The first season will wrap-up at the end of October in Miami, Florida with the $50 million teams finale.