The event is the annual get-together of former Masters champions however not all green jacket winners will be present with Tiger Woods naturally laid-up and recovering from his recent car accident. 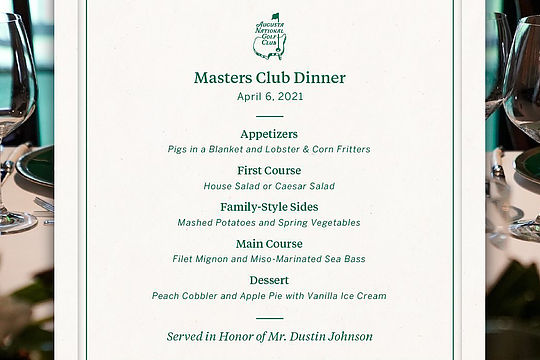 As well, Jackie Burke Jnr and winner of the 1958 Masters, and also now aged 98, will be understandably absent.

One addition will be Welshman Ian Woonsam, and winner of the 1991 Masters, who indicated some months ago he will return despite having missed the cut every year since 2009.

Johnson, unlike every other champion, has only had a handful of months to savour his victory and when pressed about the subject of his menu at the recent Players Championship, said he still hadn’t put pen to paper with his choice of food.

Johnson’s menu will start with Pigs in a Blanket and Lobster & Corn Fritters for appetisers followed by a House Salad or Caesar Salad.

Main course will feature Filet Mignon and Miso-Marinated Sea Bass with Mashed Potatoes and Spring Vegetables and if that’s not enough, the night will end with Peach Cobbler and Apple Pie with Vanilla Ice Cream for dessert.