Following the US team’s 19-9 routing of the Europeans at Whistling Straits, Dustin Johnson and Sergio Garcia have been named the inaugural recipients of the Nicklaus-Jacklin Award presented by Aon.

The new award celebrates players, who are judged to posses outstanding sportsmanship, teamwork and performance; the same spirit embodied in the famous 1969 concession by Jack Nicklaus when he conceded a 2-foot putt to Tony Jacklin for a halved match that resulted in the first ever tie in Ryder Cup history. 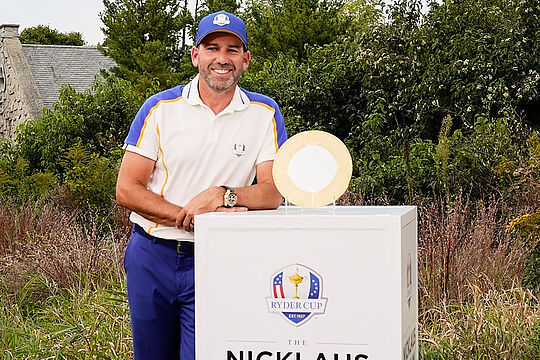 Sergio Garcia came into this year’s Ryder Cup with nothing to prove. He was already the all-time leading points scorer and with another solid 3-1-0 week at Whistling Straits, he takes his total to 28.5 points. Nick Faldo lies in second place with 25.

The 41-year-old is also the all-time Ryder Cup leader in overall wins and Foursomes wins; and with Lee Westwood making his appearance last week at the age of 48, Garcia should have plenty more years to extend his record.

“I love the Ryder Cup. We all know about the beautiful moment that happened more than 50 years ago between Nicklaus and Jacklin. I’m proud to be the first to win this award and thankful to Aon,” said Garcia.

“I try to play the game to the best of my ability, but always with respect and I enjoy it. I love my team. I’m so proud of all of them. I have so many amazing experiences and relationships with my team.”

Dustin Johnson earned his Nicklaus-Jacklin Award and then some. The 37-year-old went 5-0-0 to become the first American to achieve that feat since Larry Nelson in 1979 and only the fifth overall in Ryder Cup history.

“It’s a dream to go 5-0-0 in a Ryder Cup,” said Johnson. “For the first four matches, I had great partners in Collin Morikawa and Xander Schauffele. We played great together and gelled really well.”

“I am so proud of my teammates and my captains and loved the help from the fans. This award is something to be very proud of. All 12 of us showed great teamwork and came together as a team.”

“Sergio Garcia and Dustin Johnson both reflected the spirit of this tournament, showcased better decision making on behalf of the greater good for their team and demonstrated excellence and sportsmanship,” said Aon’s Carlo Clavarino.