World No. 1 Dustin Johnson kick-started the ‘Year of the Dog’ sounding an ominous warning to his under-25 young pup rivals heading into the New Year storming his way to an eight-shot success in the Sentry Tournament of Champions in Hawaii.

Johnson ensured daylight was a distant second posting a final round 64 to win by a dominant 24—under par four-round tally – the largest of his career.

Johnson’s win is his second in the Hawaiian event and his 18th as a professional and 17th on the PGA Tour.

The South Carolina-born golfer has also now won at least one event a year for the past 11-years of his pro career and in the process made amends for letting slip a seven-shot lead heading to the final round of last October’s WGC – HSBC Champions to hand the victory to Justin Rose.

“I knew I was playing well coming into this week and I felt really comfortable given as I have been driving the ball really well,” Johnson said.

“I put the new TaylorMade M4 in the bag last week and I have been driving it really well and I knew as long as I can keep doing that I was going to play well.”

“So after China where I struggled on the Sunday, I don’t want that to ever happen again.” 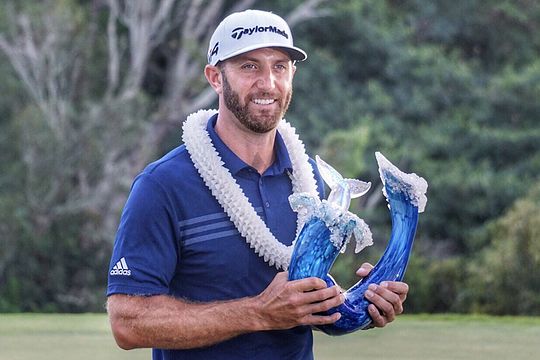 “But then in making the turn this afternoon in 20-under I told myself that I wanted to get it to 25-under so I just kept the pedal down and played really well on the backside, too.”

The 34-year-old Johnson went into the last day leading by two shots but quickly distanced himself from his rivals with four birdies in his opening nine holes on the Kapalua course.

For the second day running, Johnson dropped his only shot of the round at the par-3 11th hole when he found a greenside bunker with his tee shot.

But then in dramatic manner Johnson holed his second shot at the short par-4 12th hole for an eagle ‘2’.

Johnson then completely dominated the elite 38-player field with three birdies in succession from the 14th hole with the pick being the par-4 16th hole where he landed a 141-foot chip shot to five feet and holed the putt.

The average age of all the winners on the PGA Tour in 2017 was 29 years of age with the likes of Brooks Koepka, Jordan Spieth and Justin Thomas winning three of the four Majors and each aged under-25.

Now Johnson, in his very first event of 2018, reminded those under-25-year old rivals he intends to bark the loudest in the ‘Year of the Dog’.

“I am in a good frame of mind heading into this New Year and after getting off to a great start with this victory I just want to keep it going,” he said.

“I still have a lot of work to do as I feel I can improve a lot more with every club in the bag including my iron game that was not as sharp as I would have liked it to be.”

“But everything is definitely going in the right direction.”

Spaniard Jon Rahm secured second place with a three-under par 69 for a 16-under par tally.

The effort further boosts Rahm’s place on the European Ryder Cup ‘World’ points table while he should move from No. 4 back into No. 3 on the World Rankings.

And when asked what he has to do to unsettle Johnson as World No. 1, Rahm’s reply was very to the point.