Andrew Dodt fired a sparkling 65 to open up a two-shot lead before the threat of lightning saw play suspended on day one of the Australian PGA Championship.

In the calmer morning conditions, Dodt recorded eight birdies and a single bogey to sit ahead of New Zealander Ryan Fox and Americans Julian Suri and Harold Varner III, with the latter still left with four holes to complete when the horn sounded at 15.16 as play was ended for the day. 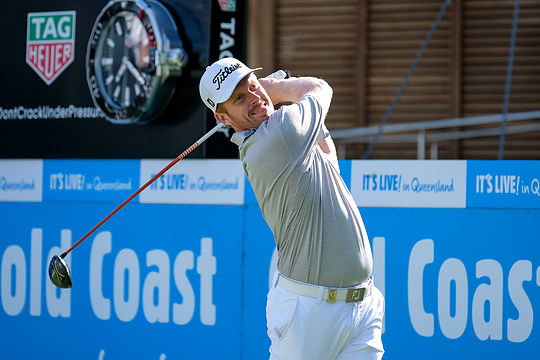 Beautiful conditions had greeted the players as the 2017 Race to Dubai got under way, with 2016 Road to Oman winner Jordan Smith hitting the opening tee-shot.

But the expected high winds arrived in the afternoon and brought with them storms, with half the field yet to complete their first rounds.

That was no problem for Dodt, however, who was in the clubhouse at seven under having come home in an excellent 31 after starting on the back nine.

The two-time European Tour winner made just seven of 20 cuts last season but has been working on his game in recent months and is glad to see that work bearing some fruit.

“I wanted to hit the ground running for the 2017 season, hole one, shot one and I managed to do that today,” he said. “I hit it really well, putted really well. It was just a really solid run.

“I just haven’t been playing the game as well as I should. I’ve been hitting it good but not getting the results, so I’ve kind of had to learn how to play the game again or just change some bad habits that I was doing.

“I wanted to hit the ground running for the 2017 season, hole one, shot one and I managed to do that today,” said Dodt.

This event was won at level par last season and Dodt revealed he was looking for a ten under par total for the week, something he was well on the way to surpassing.

“My caddy and I said, probably maybe ten under at the start of the week, so it’s nice to be seven under after round one,” he added.

Home favourite Dodt started on the tenth and turned in 34 with three birdies and a bogey but really came to life on the front nine. He birdied the first, third and fifth with a huge 45-foot left-to-righter to join a four-way tie for the lead and then broke away with closing gains on the eighth and ninth.

Fox is embarking on his maiden European Tour season after finishing fourth on last season’s Challenge Tour and he turned in 33 with birdies on the third, fourth and ninth. A short putt on the 15th brought another birdie and a further gain on the 17th saw him set the target.

Suri narrowly missed out on a card at the Qualifying School after finishing 32nd but certainly looked at home on his European Tour debut. He turned in 35 but then picked up four birdies in five holes from the tenth to jump into a share of second.

Varner made it into a play-off last season before falling to Nathan Holman and he once again showed how much he likes the Gold Coast, making four birdies in a row from the seventh before stiffing his approach to the 13th.

There was not a long wait for the first hole-in-one of the season, as Jarrod Lyle holed his tee-shot on the fifth with a seven iron from 179 yards to delight the home crowd as the ball bounced just short of the green, took two more hops and rolled into the cup.