Dodt set to change plans from NY to Royal Birkdale

Andrew Dodt’s wife, Rachel arrived from Sydney just as her husband was teeing off and packed for a five-day holiday next week in New York.

However, the 31-year old Dodt is not only in position for a third Tour success but he and joint third round leader Callum Shinkwin (72) are currently the top two of three qualifiers into next week’s Open Championship at Royal Birkdale. 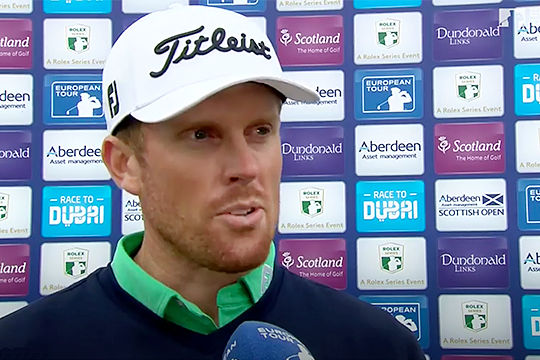 Also sharing the lead on 9-under is Ian Poulter (71) who qualified just under two weeks ago for The Open. Fellow Englishman Andy Sullivan, who recorded the lowest score of 67 on day three, is alone in fourth at 7-under in the US$ 7m event.

Dodt had led going into the last day in the recent BMW PGA Championship and while he has never contested a Major, either victory in Scotland or finishing among the leading three qualifiers would be good enough to seal a Royal Birkdale tee time.

“If I were to qualify for The Open my wife and I will be glad to change the holiday in New York and head south instead to Birkdale,” he said.

“I am 31 and I have yet to play in a Major and I would rather play in a Major sooner rather than later, so there is a lot of motivation to try and secure one of the three spots.”

“But the big motivation is to first try and win this tournament, and the rest will take care of itself.”

Dodt’s round was a mix of three birdies, including a gem at the last, and also two bogeys.

“Today it was hold onto your hats stuff and just a matter of grinding out pars,” he said.

“Though it is very different to back home and given also this is supposed to be the middle of summer in Scotland, but you have to embrace it and enjoy it and I feel as though I am doing that.”

“I didn’t get too fussed. Just stayed in the moment, stayed in the present, which is really key on a day like today. Yeah, just one shot at a time and here we are and we’re near the lead.”

Fellow Queenslander Adam Scott had a day on the links he would rather forget buckling under the weight of 78 that included a 14th hole eagle, one birdie but also seven bogeys and a fourth hole double bogey.

Scott trails in a share of 51st on 2-over par with Sam Brazel, shooting a 74, and Jason Scrivener, who signed for a 75, among a group on 1-under and tied in 29th spot.