Dodt, 29, completed a stunning return to the European Tour birdieing his opening three holes en route to a bogey-free 67 to finish at 18-under par.

The proud Gatton-born golfer had lost his Tour card at the end of 2014 but regained full playing rights at last year’s Tour School and had to wait anxiously as both Hend and Jaidee along with three others players sought to tie Dodt’s 72-hole tally.

Fellow Queenslander Hend spoilt his hopes of a second European Tour success when he fell two shots behind with a bogey at 17 and while he birdied the last it was still one shot shy of forcing a play-off.

Jaidee was left ruing a 13th hole double bogey sandwiched either side of a birdie at 12 and then birdies at 14 and 15 but then dropping a shot at 16 while he failed to birdie the par five 18th. 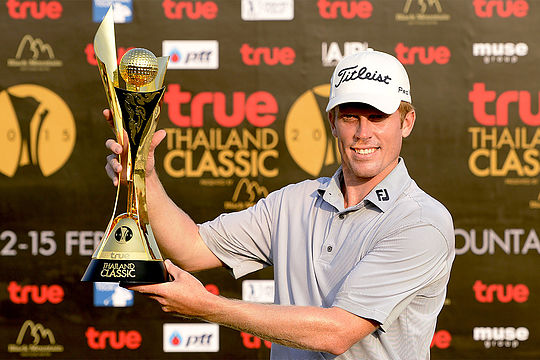 The win is Dodt’s second European Tour win after he clinched the 2010 co-sanctioned Avantha Masters in India – a victory that secured his European card.

Now Dodt has done virtually the same to earn a two-year exemption to the end of 2017.

As well, it’s Dodt’s third pro career success on top of winning last year’s Isuzu Queensland Open, and it is the 118th victory for an Australian-born player on the European Tour.

“I played really well yesterday and today but I just didn’t think I’d come out on top. I knew I was playing well but to come out and win is just a dream come true.”

“To be honest, losing my card two years ago was probably the best thing that could have happened to me. I went home last year, spent 12 months at home, played the Asian Tour again, found myself again, found my game and to be in the winner’s circle again – it’s unbelievable.”

Tournament ambassador Jaidee had drawn level with Dodt with three holes to play, but three-putted the 16th for bogey, failed to get up-and-down from a greenside bunker for birdie at the next and, requiring a birdie at the last to force a play-off, he left his eagle putt eight feet short and missed the birdie effort.

Hend went into the final round leading by a shot and went two with birdies at the second and fourth, but the big-hitter didn’t manage a further birdie and had three-putt bogeys at the seventh and 14th, as well as a dropped shot on the 17th where his front bunker shot flew the green and just stopped short from rolling in a water hazard at the back of the green.

“I pressed for the win on 17 and got a bit aggressive with my bunker shot, and I finished one shot behind. I came here to try to win,” he said.

“But all in all it was a good solid week and there are a lot of positives to take out of it. It’s good to see Dodty winning, fantastic. Obviously I wish it was me standing there winning, but congratulations to him – he’s played well over the weekend and all credit to him.”

“There are a few things that I’ll sit down and discuss with my caddie, things I did incorrectly, and hopefully next time we can solidify it and walk off the last green as the champion.”

Spaniard Miguel Angel Jiménez’s bid to extend his own record as The European Tour’s oldest winner had started well with back-to-back birdies kicking off his fourth round, but the 51-year-old Spaniard did not gain another shot all day as a 73 left him in a share of seventh.