Does Jordan Spieth’s 61 signal a return to form?

Despite previous stints as World No.1 and a handful of majors, neither Jordan Spieth or Brooks Koepka were considered serious chances at yesterday’s Waste Management Phoenix Open.

But here we are just a few days later with Brooks Koepka in the winner’s circle and Jordan Spieth celebrating a career-best 10 birdies in his round of 61 and a 4th place finish, two shots shy of a playoff.

His previous best result of the 2020/21 season came at last year’s CJ Cup @ Shadow Creek where he finished in a tie for 38th place.

“I’m really excited about the progress that has been made in the first two weeks. It is far from where I want it to be as far as how it feels, but, boy, I was debating not even playing this week, and dropping out on Friday afternoon last week,” said a relieved Spieth, who collected US$308,000 for his efforts.

“I just wanted to potentially go home, and felt like I was really far from where I needed to be…so I thought I could then go in to Pebble a little fresher. Boy, I’m glad I came [here].” 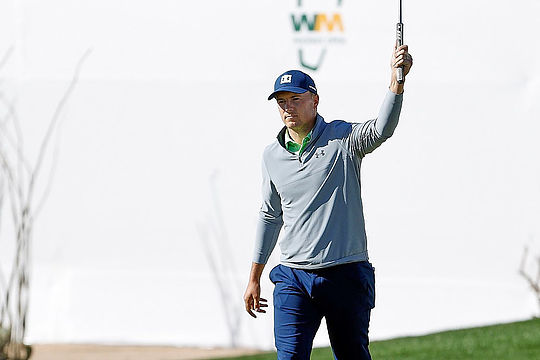 Jordan Spieth salutes the crowd during his round of 61 (Credit: PGA Tour)

With five missed cuts in his past eight starts, the three-time major champion was facing the indignity of falling outside the world’s top-100 players hitting 92nd last week before moving to 69th on Monday.

Even his fellow players were excited about seeing the 27-year-old showing some of the form that had him on top of the world.

“I think from a viewership point of view it definitely gets everyone excited,” said McIlroy, who once again recused a tournament with a low Sunday round for a T13 finish.

“And the way he plays. I mean, I watched the back nine yesterday [his third round 61]. Absolutely insane what he was doing. It’s typical Jordan. It was awesome to see him back…”