TPC Boston, MA It has come to light just how close Luke Donald was to earning a fifth European Ryder Cup team cap.

While most believed it was Scotland’s Russell Knox who was left out for Thomas Pieters it was in fact Donald who went closest to being selected. 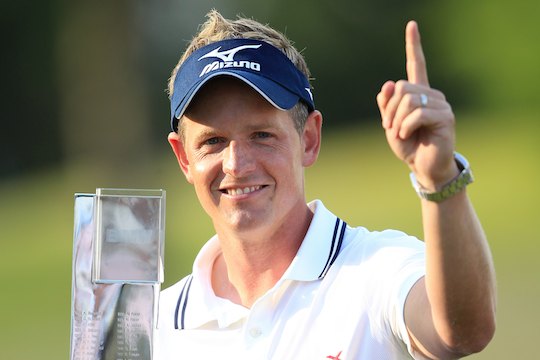 Team captain, Darren Clarke revealed his three ‘wildcard’ intentions to Rory McIlroy first on Saturday night following McIlroy’s third round in the Barclays Championship and then again to McIlroy a night later.

And McIlroy confirmed this ahead of this week’s Deutsche Bank Championship near Boston and the second of the PGA Tour season-ending FedEx Cup Series.

“Before Thomas (Pieters) did what he did to win the Made in Denmark, Darren had Luke in the team as he was leaning more to picking someone with Ryder Cup experience,” said McIlroy.

“I had that conversation twice with Darren last weekend when I was at the Barclays.”

“But then we had the same situation unfold as in 2010 with Edoardo Molinari winning in the same manner at Thomas at the Johnnie Walker at Gleneagles to get onto the team at Celtic Manor”.

Donald also had been aware that he looked all set to play in a fifth European Team after being overlooked by Paul McGinley two years ago for Gleneagles.

“It was mixed emotions for me as up to a couple of weeks ago my name was not even being mentioned to then being picked,” said Donald.

“So there was some highs and lows there and ultimately when Thomas Pieters won it forced Darren’s hand and if Thomas had not won I know, and from what I was hearing on Saturday night, I was strongly being considered.”