A blistering final round 8-under-par, 62, to clinch victory at the NSW PGA Championship at 13-under-par for a stroke victory over Andre Stolz, Kurt Barnes, Peter O’Malley and James McLean, was the breakthrough the 36-year-old needed.

His future fortunes before clinching today’s victory were focused upon returning to the Japan Tour qualifying stage after gaining full status earlier in the year only to loose those playing privileges after a poor rookie season. 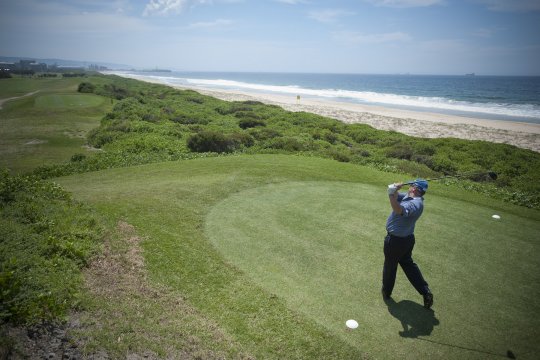 Peter O'Malley nails his drive down the 7th at Wollongong Golf Club during the final round of the NSW PGA Championship Photo: Anthony Powter

Winning the NSW PGA Championship has gained him starts in next week’s Australian Open, the Australian PGA and the JBWere Masters.

These options before today’s victory were not available for the Queenslander who undertook a PGA Traineeship at Indooroopilly Golf Club from 2006 to 2008 teaching the game before returning to tournament golf in June last year.

“This is a victory out of the blue,” said Guyatt.

“I really want to play this week’s Australian Open because the field is unbelievable with all the international players attending. I’m not sure what to do. I figure I can fly out the Sunday of the Australian Open and still make Japan in time.”

Guyatt has found himself with a decision he’d never thought he would confront.

Heading into this week’s tournament he’d missed the last two tournament cuts and there were no early signs with his game that this week would be any different.

“I’ll make my decision later this evening after talking to my wife,” said Guyatt.

“Obviously I would love to play as it’s going to be one of the best fields in the history of Australian golf, but I need to chat to Rachel first and see what we are going to be able to come up with.”

With three kids under seven and a wife granting only three weeks in a row on tour, Guyatt was mindful of maintaining his work/life balance.

“The Australian Open then heading to Tour School would make it five weeks away from the family, which is tough.”

Still coming to grips with his victory after spending more than an hour awaiting the outcome, Guyatt was in awe of his accomplishment and the way the tournament had unfolded.

This title could have fallen into any number of player’s hands as the leader board continually changed throughout the day.

Matthew Miller had it going early moving to share the lead at 10-under-par after ten holes along with One Asian Tour winner Kurt Barnes.

Former PGA Tour player James McLean was in the hunt all the way to the last hole when he flew the green to eventually make bogey. It would prove costly as a par on the last would have forced a playoff with Guyatt.

Tour journeymen Andre Stolz and Peter O’Malley had chances to claim the title heading into the last hole. Their approach shots agonisingly falling short of their intended targets to deny birdie opportunities.

It made for a riveting finale for this championship as the title remained in the balance until McLean’s par putt on the 18th failed to drop for par to give Guyatt victory.

This was one of the best Tier Two championship finishes in some time.

The tournament had everything and full credit should go to the way each year Wollongong Golf Club presents and supports this tournament.

Strong local support, a classy links layout that withheld the challenges of nature and provided a stern test for a stellar field which included US PGA, European, One Asia and Australasian Tour winners.

Guyatt had risen above it all to record his maiden professional tour win in an emotional charged victory.

“You’ve no idea how long it felt waiting for the result to occur,” said Guyatt after the victory ceremony.

“This morning I kind of knew something might happen. I then shoot a 62 to win by one. That’s simply unbelievable.”

The enormity of his achievement after so many years of self belief and hard work had finally set in for Guyatt as he signed autographs and posed with with the locals for photos.

“That’s something special when you win your first professional tournament. Now I have to make some decisions about Japan and playing the Australian tour events, but what a position to have.”