Zecheng Dou entered the final 18 holes tied with Ryan McCormick and Dawson Armstrong atop the Ascendant Presented By Blue leaderboard, but a strong 5-under-par final round was enough to claim the victory and all but secure his playing rights for the PGA Tour.

After turning professional at the age of 17, Dou embarked on the PGA Tour China in 2014. In 2016, he won four times there before gaining the Order of Merit title. 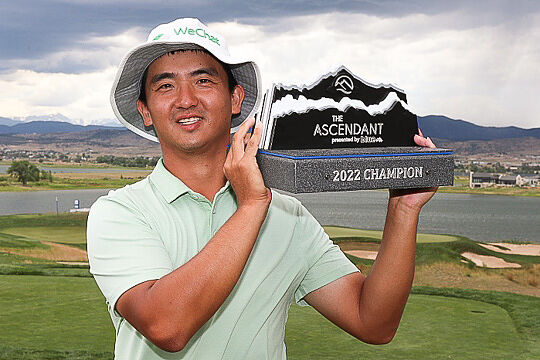 “The first year I got there, I kind of felt I wasn’t ready. But it’s been three years now from that time, and I do feel like all parts of my game are set for the big Tour,” Dou said to the media. “It feels real now.”

Sunday’s win propels Dou to second in Korn Ferry Tour season rankings behind fellow countryman Carl Yuan, who had already earned his place on the main tour. Yuan consolidated his No 1 ranking on the Korn Ferry Tour following his seventh top-10 of the season, after he launched a back-nine charge which saw him also card a 67.

Dou, who rose from 19th to second on the points list, will now turn his attention to battling it out with Yuan for the No 1 ranking, which also grants exemptions into The Players Championship and the US Open next season. It was the first time Chinese players had taken the top two spots in the Korn Ferry Tour’s history.

Harrison Endycott finished the best of the Australians in a share of 9th position at 13-under-par, four shots short of Dou. Curtis Luck was the only other Aussie to make the weekend but finished well down the leaderboard in a share of 67th position.

The cut came in a 1-under which saw Ryan Ruffels and Rhein Gibson missing the weekend.