Geoff Drakeford has progressed to the round of 16 at the British Amateur Championship at Royal Portrush & Portstewart in Northern Ireland.

Drakeford accounted for Ireland’s Rory McNamara 4&2 in his second round encounter and will meet France’s Ben Leonard in the third round. 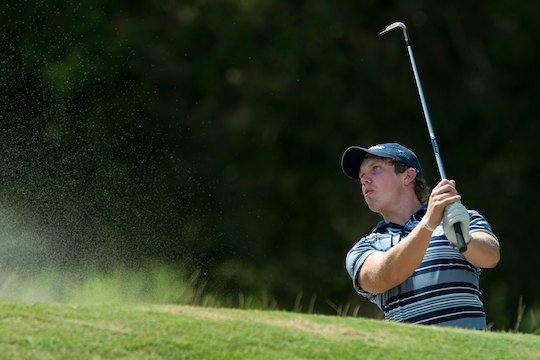 With the majority of the Australian contingent failing to qualify in a poor showing and Cameron Davis being eliminated in the preliminary round, all hopes rest with Drakeford to see if he can reproduce the efforts of Bryden McPherson who was the last Australian to win the British Amateur in 2011 at Hillside Golf Club.

Macpherson broke a 57-year Australian winning drought at the British Amateur championship and became only the second Australian to win the title following Doug Bachli in 1954.

Drakeford has the game to challenge in these bigger events and certainly can play links golf. The question will be more about his capacity to retain his course management at critical stages of the match.

In the past, there have been occasions where Drakeford has let slip major titles due to questionable club selection and shot making at critical stages of matches, the most recent examples at the Australian Amateur earlier this year in Adelaide in his third round match against Curtis Luck and in the 2013 final against Cameron Smith.

Yet Drakeford is a gritty competitor and majestic striker of the ball. His raw power is his greatest weapon on the course as he can outdrive virtually any competitor when he needs to call on that extra distance. This should serve him well at Royal Portrush and Drakeford is due for a major title.