Draper opened his campaign with a sluggish 74 (+2) on the first day but subsequent rounds of 72 and 69 was enough for a one stroke victory over New South Wales’ Guy Wall. 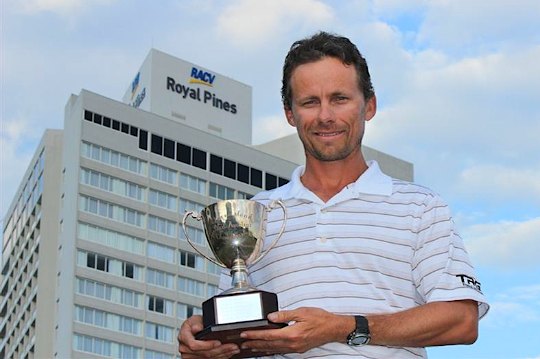 Starting the final round three shots adrift of the leader Guy Wall (Pymble), Draper showed his intention early opening with a birdie on the first hole.

This was one of five birdies that helped him race into contention under the radar of the lead group. Draper eventually closed with a brilliant final round of 3-under par 69 to finish on 215 (-1) for the Championship title.

Guy Wall was one shot back in second place on 216 (Ev) after a closing round of one over par-73. This followed his opening round of 75(+3) and a fantastic second round of 68 (-4) which was the lowest of the tournament.

As part of Srixon’s support of this year’s Championship, each player was invited to receive a dozen Z-Star Golf Balls and compete in a separate nett event. Mark Coonan from the Pacific Golf Club was extremely happy to have made this decision as it led to him winning the Srixon 54 Hole Challenge.

In the Srixon Teams event section, it was a close battle between two Brisbane based golf clubs.

The eventual winners were the team from Nudgee Golf Club that comprised of Steve Toyne, Grant Fenell and Gary Heslop.

The winning score left them with a one shot win over the team from Keperra Golf Club – Tony Robertson, Daniel Butler and Trent Greer.