Drewitt watched on as playing partner Xin Jun Zhang of China three-putted the 72nd hole to send the pair into overtime along with China’s Hao Tong Li, after the trio finished at 8-under 280. 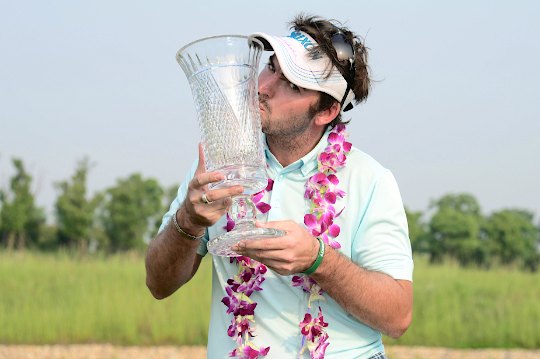 After all three players parred the first extra hole, the players returned to the 18th tee where Drewitt was the only player to find the fairway with his tee shot.

Li’s approach shot missed the green, while Zhang hit a remarkable approach from a fairway trap to within ten feet of the hole.

With Drewitt eight feet away, Zhang again missed before Drewitt knocked his putt in for the win.

“I’d seen the putt a few times before, so I had a good idea of what it was going to do,” 23-year-old Drewitt said of his winning putt.

“I’d be lying if I said I wasn’t nervous. I had a good read on it. I knew I didn’t have to hit it too hard because it was downhill, down grain.

“To see that and have the realisation I had won and have all the emotions flood out, it was unreal. It was the best feeling I think I could ever have.”

The win was significant as Drewitt became the first Australian and foreign-born winner in the fledgling PGA Tour China Series’ history, as well as the winner of its first playoff.

Tied for 4th two strokes out of the playoff were a quartet of players including Australians Scott Barr and David Lutterus, along with Ze Yu He and Anthony Kang, while Chris Campbell was also inside the top-ten in 8th place.