Brett Drewitt held off a determined Michael Lambert with a 1-up victory in the final of the NSW Amateur Championship at the Elanora Country Club in Sydney.

In an evenly contested final that at one stage had Drewitt 3-up over Lambert with three holes to play, a tricky five-footer on the last nailed to the centre of the cup gave Drewitt victory.

“I knew Michael [Lambert] had some fight in him,” said Drewitt.

“I was glad to nail the putt on the last so as not to go to extra holes. This is a huge result for me and proves the work that I’ve done with Garry Barter has paid off as my swing held up during the closing nine.”

By the 27th hole Lambert had reduced the margin to one after Drewitt had progressed to be 3-up at one stage. It set the stage for an exciting back nine around the majestic Elanora Country Club, a layout perfect for elite match-play encounters with reachable par 5′s and attackable par 4′s.

“I managed to get myself back into the match by the turn,” said Lambert, a former professional who returned to the amateur ranks and plays out of New South Wales Golf Club.

“Brett played brilliantly, applied the pressure at the right times and I missed some putts. It was a great final encounter and he’s a worthy winner of the title.” 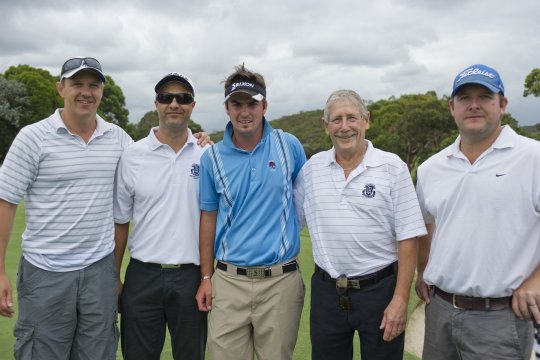 Brett Drewitt and his followers from Long Reef Golf Club in Sydney celebrate his victory at the NSW Amateur Championship (Photo: Anthony Powter)

When Lambert stiffed a wedge to 4 feet on the 35th hole (Elanora’s 122 metre par 3 17th) to then proceed to sink the putt, he had reduced the margin to one after Drewitt made a mess of the 34th hole.

Drewitt nailed a seven iron to the middle on the 36th hole with Lambert leaking his approach right. With a championship pin placement back-left and just past a ridge, the advantage had swung to Drewitt’s favour.

After Lambert putted to six feet, Drewitt was left with a tricky five-footer left to right which he made no mistake with.

“Added with the way I drove the ball, I was able to keep the pressure on and get the result. I came in with high expectations, with playing the qualifying rounds at my home course at Long Reef and felt confident all week.” 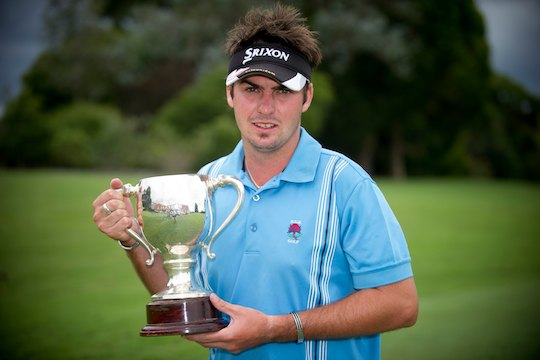 Drewitt had earlier accounted for Jake Higginbottom 3&2 in yesterday’s semi-final after a 2&1 victory over Ricki Kato in the morning’s quarter final.

Lambert secured his championship final berth with a win on the 19th against Callan O’Reilly after earlier accounting for Daniel Pearce, 3&1.

Drewitt’s win over Higginbottom, the 2010 NSW Amateur champion and Australia’s top-ranked amateur, was significant given the recent successes Higginbottom has experienced, particularly on the professional tour.

Higginbottom made the cut at the NSW PGA Championship, Australian Open and was runner-up at the NSW Open .

Today’s victory for Drewitt will relieve some of the pressure with National teams selection and reconfirm his standing as one of Australia’s top amateurs.

Drewitt was the second seed in this championship and with his last victory at the 2011 South Australian Classic, today’s victory was timely.

“I finished third last year after leading into the final round, so hopefully I can go two better this year.”

Drewitt is a methodical worker of the game, often operating under the radar.

With four victories in two years, including an international win, Drewitt has slowly been building his standing on the international amateur stage.

Further wins in Australia are a real possibility as today Drewitt proved he can withstand pressure and respond with steely resolve.

“I’m swinging the best that I have for ages,” he says.

“I held it together out there this afternoon against a fine competitor. That’s a confidence booster and hopefully there will be more to come.”