Drewitt in the hunt at British Amateur

Brett Drewitt headed to the UK this season with plenty of confidence following his win at the Golf SA Classic.

It was Drewitt’s first stroke play championship title and the win represented a breakthrough for the 21-year-old. 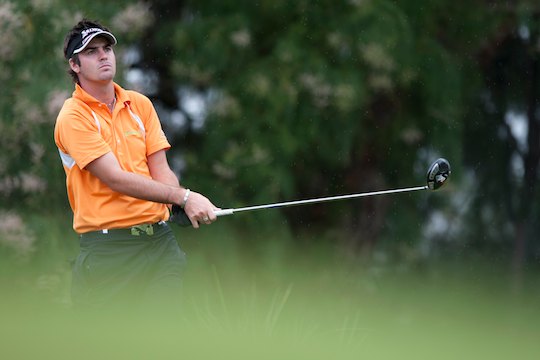 Drewitt’s previous titles were in match play and in 2010 he was the only Australian to win internationally with his victory at the US Pacific Northwest Amateur adding to his earlier win at the Queensland Amateur.

Drewitt’s opening round at the stroke qualification round at the British Amateur championships of 1-over-par 72 at Hesketh, has him in a tie for 14th and well in the hunt just five behind opening leader, New Zealander Landyn Edwards.

Edwards fired an impressive 4-under-par, 68, at Hillside for a one stroke lead over Spain’s, Adrian Otaegui, who carded a 3-under-par for the day’s low round at Hesketh.

Otaegui is the 2010 British Boy’s champion and the 18-year-old was the only player to break 70 on a difficult opening day at Hesketh.

Drewitt is comfortably inside the desired the top 64 players and ties who will qualify for the match play and the championship proper following Tuesday’s second round.

A tenacious match play exponent, Drewitt has the game and repertoire of shot making to do well in these championships.

Playing out of the Long Reef layout in Sydney’s northern beaches, Drewitt knows how to work the ball around a links layout and to play within the conditions that he confronts.

This will certainly serve him well this week in Southport.

Bryden MacPherson is the next best Australian behind Drewitt after opening with a 4-over-par, 75, at Hesketh to be in a tie for 76th position.

Matt Stieger opened with a 5-over-par, 77, at Hillside, arguably the harder layout of the two qualification courses.

Stieger is presently in a tie for 111th position along with fellow countryman, Kalem Richardson after the Tasmanian also fired an opening 77 at Hillside.

Ryan McCarthy opened with an 80 at Hillside and will need to improve on his 209th position to make the match play segment of these championships.

Drewitt feels the pressure is off and he can go about improving his game knowing that he’s got the first main international win under his belt as well as a stroke title that had evaded his hands for the last eighteen months.

That aside, Drewitt is very dangerous once in match play, which is a format that clearly suits him.

Opening strongly to be within five off the leader and well inside the top-64 and with one qualification round left should see Drewitt through in this championship.

This not only has built confidence, but has the world number 42 determined to make his mark internationally.