Brett Drewitt has given his return to the PGA Tour a real boost after finishing third at the Veritex Bank Championship, three strokes behind winner American Tyson Alexander, on the Korn Ferry Tour in Texas.

Drewitt has moved up four places to 20th on the season points list and inside the all-important top-25 who earn PGA Tour privileges. Last September, the 30-year-old claimed his first Korn Ferry title at the Lincoln Land Championship in his 116th career start to elevate him into the top-25. 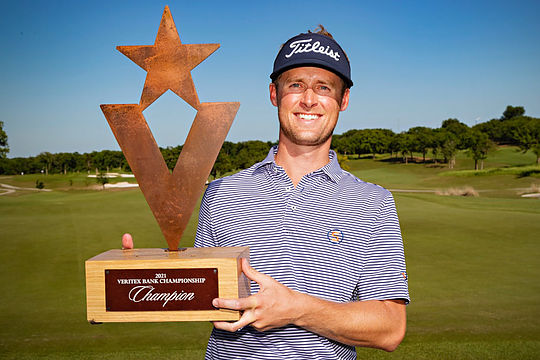 Sunday’s third place was a much needed result for the Aussie with his best finish this year a share of 26th earlier in the month at the Emerald Coast Classic. Drewitt last played on the PGA Tour in 2017, playing in 19 events and making the cut in 9 to finish 196th in the standings.

This season on the Korn Ferry Tour has been Drewitt’s best to date banking a tidy US$234,510, which includes four top-10 results.

Alexander overcame a five-stroke overnight deficit to secure his first Korn Ferry Tour win. Alexander was 2-under through four before dropping a shot at the par-4 fifth hole. He went on to card six birdies through the rest of the round, including four in a row from the 9th to the 12th, to reach 23-under and a one-shot win over fellow American Theo Humphrey.

The 32-year-old entered the week 88th in the Korn Ferry Tour points standings and leaps to 31st with the win.

Jamie Arnold was the next best Australian behind Drewitt securing a much needed top-20 result with a share of 20th at 16-under-par. Arnold is currently ranked 97 in the standings.

The cut came in at 6-under par at The Rangers Golf Course seeing Harrison Endycott and Ryan Ruffels missing the weekend along with John Senden.

Ruffels has one runner-up finish this season on the Korn Ferry Tour last August at the Pinnacle Bank Championship where he shared the 54 hole lead to eventually finish one shot short of winner Seth Reeves after bogeying two of the last three holes.

He has four top-25 finishes so far to be ranked 74th in the standings.

Endycott is also looking to break through having recorded two top-5 results this season with his best a 5th at the Chitimacha Louisiana Open. The 24-year-old is currently ranked 81st in the standings.