Brett Drewitt and Michael Lambert will contest the 36-hole final of the NSW Amateur championship at Elanora Country Club in Sydney.

Drewitt accounted for Jake Higginbottom 3&2 in today’s semi-final after a 2&1 victory over Ricki Kato in the morning’s quarter final. 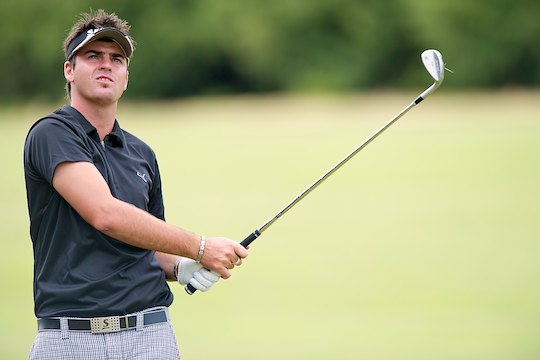 Lambert secured his championship final berth with a win on the 19th against Callan O’Reilly after earlier accounting for Daniel Pearce, 3&1, in the morning quarter-final.

Drewitt’s win over Higginbottom, the 2010 NSW Amateur champion and Australia’s top-ranked amateur, is a major feather in the cap for the world number 57.

Drewitt is the second seed in this championship and with his last victory at the 2011 South Australian Classic, he’s hungry to notch up another major amateur title.

“I’ve been swinging it well for a while now, but not getting the results that I wanted,” said Drewitt.

“This afternoon I got off to a good start against Jake [Higginbottom] and kept the pressure on to get the win. It’s great to be playing this well and with three main events to come, I feeling confident with my game.”

In his encounter with Higginbottom, Drewitt was 4-up against the world number 14 by the sixth hole and applied the pressure across Elanora’s back nine to keep Higginbottom out of the match.

“I played the way I wanted to, hit the shots that I was visualising and basically played strong. I’ve worked hard with Gary Barter with my swing and the timing is there. The hard yards and work we both have put in is paying off.”

Michael Lambert will be no pushover for Drewitt in tomorrow’s final.

Lamber, a former professional, plays out of NSW Golf Club and last Sydney Major Pennant season proved problematic for top-tier players – remaining undefeated for the series as NSW Golf Club made their way to the Division 1 final only to fall victim to the Sydney powerhouse of Pennant golf – Moore Park.

From 2008 to 2009, Lambert played the Australasian pro-am circuit with some success before returning to the amateur ranks. A tenacious competitor and a seasoned campaigner, Lambert will apply his experience and know-how against Drewitt in tomorrow’s final.

Drewitt, eager to regain another title and get the attention of the Australian selectors for the oncoming international events, matched against Lambert – whose hunger for victory has never waned despite his transition to the amateur ranks.

Drewitt needs the win, especially with Eisenhower selection on the cards but irrespective of the outcome he’ll head into the next week’s Riversdale Cup in Melbourne, confident and ready to make his mark on Australian amateur golf.