Aussie-based US Collegiate golfer Mitch Krywulycz is still pinching himself after his Augusta State team won successive NCAA titles on the weekend and in the process created US collegiate golf history. 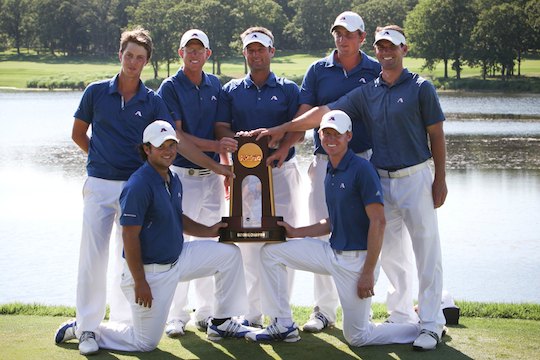 With the victory, Augusta State became the first men’s golf program to repeat as National Champions since the Houston Cougars in 1984-85.

Krywulycz also becomes the only Australian-based amateur to secure successive NCAA titles within the tough US collegiate system.

Augusta secured the title with victories in the final from senior Carter Newman (7&5 over TJ Mitchell), senior Mitch Krywulycz (2&1 over Hudson Swafford) and junior Patrick Reed (2&1 over Harris English).

Reed and Newman went undefeated in match play at 3-0, while Krywulycz went 2-1.

During the last two seasons, Reed posted a 6-0 match-play record at the NCAA Championships, while Newman went 5-1, Norlander went 4-2 and Krywulycz went 3-3.

Krywulycz, who won the clinching point in the Jags’ victory over Oklahoma State in the 2010 final at The Honors Course, secured the first four holes in his final against Hudson Swafford and never trailed.

Swafford mounted a rally, winning the seventh, eighth and ninth holes to close his deficit to 1-down.

Krywulycz countered with birdies at the par-4 12th and par-5 14th for a 3-up lead. Swafford birdied the 16th to cut Krywulycz’s advantage to 2-up before the Jags’ fifth-year senior made perhaps the best bogey in school history on the difficult par-4 17th.

After driving into the right rough, Krywulycz second shot hit the left side of the green and rolled down the shaved bank into Lake Louise.

After his penalty drop, Krywulycz wedged his fourth shot to within five feet and then stepped up and drained the five-footer for bogey, halving the hole and closing out Swafford and the match.

“It doesn’t necessarily reward the best team, but every match is under the pump, all the time, every hole. This is a massive win and one I’ll never forget. For an Aussie it’s hard to comprehend how big this event is, but it’s simply an amazing feeling to secure another title.”

Augusta State have a history of excelling with a combination of American and international standouts and this season is certainly no exception.

Of the Jags’ 11-man roster, five players hail from outside the US with four Swedes, Olle Bengtsson, Jacob Carlsson, Henrik Norlander and Alex Wennstam and the Aussie Krywulycz.