Despite holding a seemingly comfortable five-stroke lead heading into the final round, Frenchman Victor Dubuisson had anything but a walk in the park before claiming his maiden European Tour title by two shots in the Turkish Airlines Open by the Ministry of Culture and Tourism.

The 23-year old’s lead was threatened by the likes of Ian Poulter, Tiger Woods, Justin Rose and Henrik Stenson as they painted the leaderboard red while Dubuisson started with nine successive pars before his first birdie of the day at the 10th. 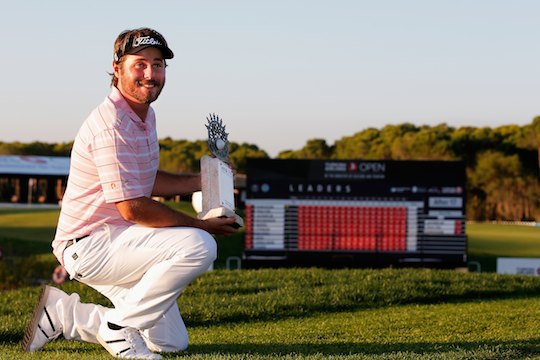 Adding to the dramatic conclusion to the event was Welshman Jamie Donaldson who drew level with a stunning hole-in-one on the 16th, netting him a million Turkish Airlines air miles, before setting the clubhouse target of 22-under par after a final round of 63.

However, Dubuisson bounced back from his only bogey of the day on the 14th with a birdie on the 15th and back-to-back birdies to finish for a final round of 69 and winning total of 24-under par, two strokes clear of Donaldson with Woods and Rose tied for third at 20-under.

“It feels so great,” said Dubuisson, “It hasn’t sunk in that I just won such a big tournament. Tiger, Henrik Stenson, Justin Rose, they were all in contention with me today.”

“So it’s a really great feeling, and I’m really proud of what I did because it was the toughest golf day of my life. I’m played great on the front nine. I was struggling on the greens.”

“On the back nine, I tried to do my best to make some birdies and I had this great putt on 17. It’s one of those putts that you make to make a dream come true. Everything feels like a dream right now.”

Marcus Fraser was the best of the two Australians in the field, tied for 29th at 12-under, while Brett Rumford had a forgettable week to finish in 72nd position.

Dubuisson’s victory elevates him into the top 10 on The Race to Dubai ahead of next week’s DP TOUR World Championship in Dubai. FedEx Cup champion Stenson’s tie for 7th enabled him to retain the lead for The Race to Dubai with Rose his nearest rival some €213,468 adrift.