Jason Dufner has made amends for his Atlanta Country Club anguish two years ago to win the 95th PGA Championship by shots at Oak Hill.

Dufner had the crowd roaring with approval after being greeted with a hug from his wife following his final round 68 for 10-under par 270 tally. 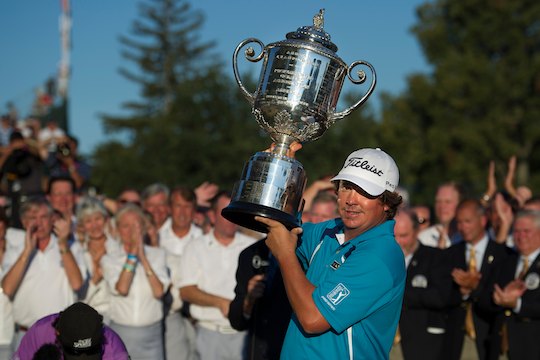 Fellow American Jim Furyk (71) was second on eight under par while Sweden’s Henrik Stenson moved even further ahead on the Race to Dubai shooting a final day 70 to be in third place on seven under par.

It was Furyk’s third place finish in the majors.

The unassuming Dufner broke out in a rare smile when handed the gleaming Rodman Wanamaker Trophy.

“It’s been a tough day and a long golf course and the win hasn’t hit me yet,” said Dufner.

“I can’t believe this is happening to me to come back from what happened a couple of years ago in this Championship when I lost in a play-off to Keegan (Bradley), so it feels really, really good.”

“This is a great golf course and I feel privileged to have played here this week at Oak Hill and to play in this tournament.”

“It’s just a great feeling to finally win one of these big tournaments.”

Dufner went into the last round of the final Major of 2013 one shot behind Furyk and drew level with his older rival with a birdie at the 4th.

Dufner then led when he birdied the 5th. He birdied the eighth and then went two clear when Furyk bogeyed the ninth.

Dufner then added a fourth birdie at the par four 16th before closing with back-to-back bogeys at 17 and 18 with Furyk doing the same.

“I just decided today I was going to be confident and put my best foot forward and try and get the job done,” Dufner added.

“So I tried to play aggressive and win this thing. The last two holes were a little unfortunate as it would have been nice to end with no bogeys but I am just happy to get the my job done.

“So this is a big step up in career.”

Adam Scott put himself in a great position again in a major but was let down by his putting and closed in a tie for fifth alongside Scott Piercy.

It was Scott’s 10th top ten finish (excluding his Masters win) in a major and with stats like that it is only a matter of time before the Australian claims another Major scalp.

Jason Day recorded his sixth top ten finish in Majors in just four years following a final round 67. Still just 25-years-old, Day has plenty of time on his side and if he keeps putting himself in position, a Major title will be his sooner rather than later.