Jason Dufner took advantage of a poor final round from Daniel Summerhays to win the Memorial Tournament on Sunday.

Summerhays took a three-shot lead into the final round at Ohio and was well placed to claim his first PGA Tour title. However, the 33-year-old from Utah lost momentum as former US PGA champion Dufner hit back from a third round 77 to land a fifth PGA Tour title.

Dufner finished at 13-under, three shots clear of Rickie Fowler and Anirban Lahiri and in the process joined Nicklaus by becoming the second Ohio-born winner of the Memorial, a tournament Nicklaus created in 1976 and won twice.

“I’ll always have a close place in my heart for this event, being a champion now,” Dufner said. “It will be very special for me to look back and know that I’m part of an event that Mr. Nicklaus put on out here on the PGA Tour.”

Add to the mix a third round 77 which seemed to knock Dufner’s chances, the Sunday’s victory was even more remarkable. Not since Nick Faldo in the 1989 Masters had anyone shot a 77 in the third round of a PGA Tour event and still gone on to win.

“Yesterday was not my best day,” Dufner said. “But I had to get over it quick. It’s a 72-hole tournament, there’s a lot of things that can happen out there. I knew I was still in the mix.” 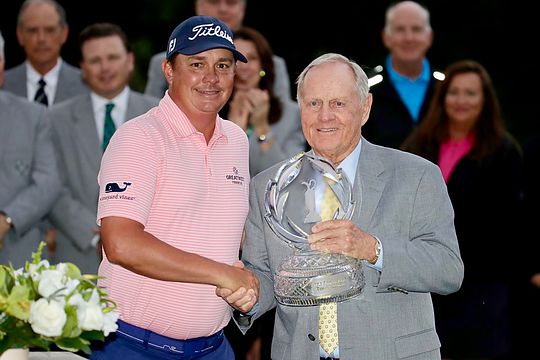 Fowler was in position to force a playoff on the 18th hole by making birdie, instead he made bogey after Dufner ended it with his big par putt. Earlier in the round Fowler was well in contention but, after four birdies, his challenge ended with bogeys on the 14th and 18th as he signed for a 70 to finish tied for second with Lahiri, who closed with a 65.

Summerhays, who finished third in last year’s PGA Championship, saw his hopes dashed with a 78 that included four bogeys and a double bogey. The two dropped shots at the final hole cost him a share of fourth place with Matt Kuchar and Justin Thomas and left him tied for 10th.

What’s In The Bag: Jason Dufner

Jason Day and Marc Leishman finished the best of the Aussies in a share of 15th position.

Brett Coletta secured a top-25 finish in a gutsy display from the 2015 US Amateur Medallist who is playing in his rookie professional year on the PGA Tour’s third-tier Canadian circuit and was at the Jack Nicklaus-hosted event courtesy of a sponsor’s exemption.

Adam Scott fired a closing round 74 dropping four places to finish in a tie for 31st position with Greg Chalmers moving thirteen places with a closing 73 to finish in a share of 52nd position.

Rod Pampling, Cameron Smith, Curtis Luck and Matthew Griffin rounded out the Australians at the tail end of the leaderboard.

Steven Bowditch missed another cut to see out the weekend along with Aaron Baddeley and Ryan Ruffels.