American Tyler Duncan claimed his maiden PGA Tour victory sinking a critical putt on the second hole of a playoff with Webb Simpson to win the RSM Classic at St Simons Island in Georgia.

The 30-year-old turned pro in 2012 and this was his first win in more than 150 starts in both the main and secondary PGA Tours.

Duncan made an 8 metre putt on the final hole of regulation, then birdied the second hole of a sudden-death playoff with Simpson. Earlier, Duncan finished at 19-under after carding a first-round 67 before rounds of 61-70-65.

He moves from 151st to 11th in the FedExCup standings and earns invitations to events such as the Sentry Tournament of Champions, The Players Championship, the Masters and the PGA Championship. Duncan also is exempt on the PGA Tour through to the end of the 2022 season.

“I’m just so happy to be here playing and to come out here and win is just unbelievable,” said Duncan.

“Just so many different things that I’m very, very excited for. You never know, this is a crazy game, It can go several different directions.”

Simpson, the former US Open and Players champion who in a few weeks in Melbourne will represent the US in the Presidents Cup, took a two-shot lead into the back nine. Playing in two groups behind Duncan, Simpson played solid golf parring the last two holes with 2 metre putts before Duncan’s birdie on the last forced the playoff. 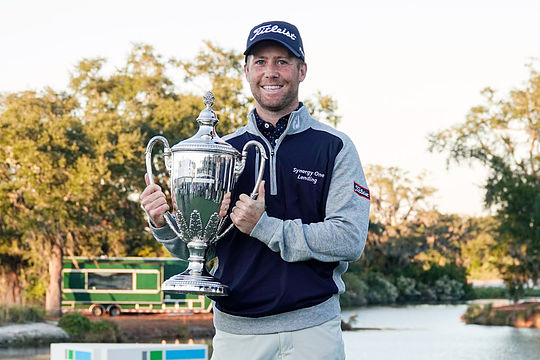 The runner-up result reflects a stellar run of form for Simpson who has four runner-up finishes from his last 10 starts.

“My game is continuing to build and go in the right direction,” said Simpson, who has not won since the 2018 Players Championship.

Brendon Todd, seeking his third straight PGA Tour victory, took a two-stroke lead into Sunday but faded to finish fourth at 16-under- par after a final round of 72.

“I was definitely tired on the back nine,” said Todd.

Todd was bidding to become the first player since Tiger Woods in 2006 to win three straight tournaments on tour.

Rhein Gibson finished the best of the Australians in a share of 43rd position, his closing rounds of 74-71 letting down his opening rounds of 66-64 which had Gibson right in the mix mid-way through the tournament.