Melbourne’s David Micheluzzi is heading home to Australia rightfully proud of his efforts at the close of the 21st anniversary hosting of the Alfred Dunhill Links Championship.

Micheluzzi battled his way through Friday’s brutal second round conditions, posting a closing round of 71 on the famed Old Course to eventually share 36th place in the $5m event in Scotland. 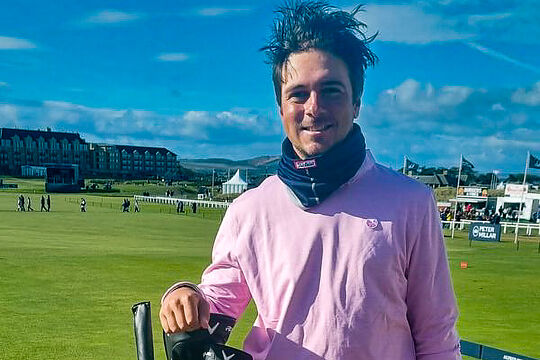 The 26-year-old Cranbourne golfer travelled to the Home of Golf having qualified via the Australasian Tour Order of Merit. He had previously teed-up on the Old Course as an amateur for four years running in 2016, ’17, ’18 and ’19, in the St. Andrews Links Trophy.

Micheluzzi’s final round was a mix of five birdies, including holing putts for birdie each from 15-feet at the par-3 eighth hole and the par-5 13th. He then ended his round sandwiching a bogey at the 17th among three pars between the 15th and final holes.

The effort handed Micheluzzi a share of 36th place and tied with five other players at five-under that included Frenchman Romain Langasque who had equalled the Old Course record on the opening day with a sizzling 61.

“I do feel proud with myself to be standing here now having played all four rounds as I really didn’t expect this result but then I could have done a lot better today with the putter after putting well the first three days,” he said.

“Overall, I really can’t complain and it was a pretty solid week. Also, it’s nice returning to the Home of Golf to pick-up a pay cheque.”

The Scottish event was Micheluzzi’s seventh DP World Tour counting event but his first in two years and having earned €2,500 for his 69th placing early in January 2020 at the South African Open.

In contrast Micheluzzi was returning home with a cheque for €31,132 for his Dunhill Links showing and a nice reward having endured the brutal conditions that the 167 players and their amateur partners faced on Friday, with driving rain and winds reaching close to 50 mph testing the mettle of all in the field.

Micheluzzi was out on the Old Course where he produced a highly respectable score of 73.

“It was just awesome returning to Scotland and here to the Old Course, though not sure if I want to go through Friday’s conditions again but then I’ve been here before for the Links Trophy and we had similar weather,” he said with the sounds of a bagpiper in the background.

“Of course, this was my first time playing the Dunhill Links but I kind of knew what to expect.”

“I was here at the Old Course on Friday and given the weather, I think of the three venues this was the course to be on as Kingsbarns is really exposed and also Carnoustie, and where I’ve been told it was just brutal.”

“Also, we were pretty fortunate on Friday as we started at the 11th hole here at the Old Course and while we played all the inward holes into wind, it was fine and happy to shoot just one-over.”

“Then to play Carnoustie on Saturday was special as we played the front nine straight into the win and I holed a pitch shot or about 25 metres at the eighth hole that got me to four-under as it looked like it was not going to make it,” he said.

“That was like a ‘wow’ moment seeing that go in.”

Ahead for Micheluzzi is the up-coming 2022/23 Australasian Tour season and with both the Australian Open and Australian PGA Championships co-sanctioned for a first time by the DP World Tour.

“The Aussie Tour starts in a couple of weeks, so it will be back home for a few weeks and then off to WA for the start of the new season,” said Micheluzzi, who finished runner-up at the 2018 WA Open and 5th at the Australian Open as an amateur that year.

“Then there’ll be the Aussie Open, the Aussie PGA so I’m looking forward to plenty of golf. I’ve decided not to enter overseas qualifying schools and I am just going to focus on playing at home to secure my card.

“I finished 14th last year and that was not really playing my best, so with the way I am playing at the moment I feel like I can do some damage.”