The victory earns Dunlap a spot in next year’s US Open at The Country Club in Brookline, and exemptions into the next two US Amateurs. 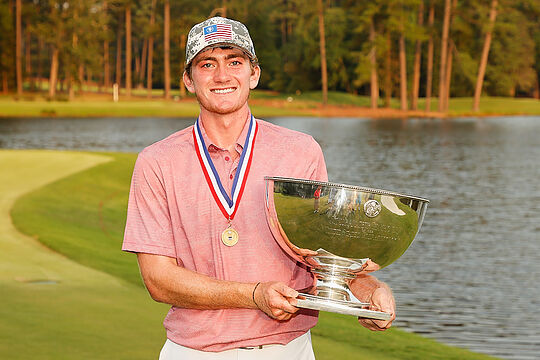 “My heart is still beating 100 times fast,” said Dunlap. “This is unbelievable. In junior golf, this is the big one, and to have my name on it, I can’t even put it into words.”

Dunlap’s form of late has certainly been impressive. Beginning in July he won the only match-play event on the American Junior Golf Association circuit, the Polo Junior Golf Classic at Liberty National Golf Club in Jersey City, New York.

Last week he was the runner-up in the Junior PGA Championship at Kearney Hill Golf Links in Lexington, Kentucky and in between those events, he was the medallist in a US Amateur qualifier on 5th July.

Also in May, he shot 62 to Monday-qualify for the Korn Ferry Tour’s Simmons Bank Open for the Snedeker Foundation, before missing the cut with rounds of 75-74.

Dunlap took a slim 1-up lead into the lunch break on the strength of birdies on the 10th and 13th. He lost the par-3 16th to Trolio after hitting his tee shot into the penalty area and Trolio closed the morning round with a 6-foot birdie on the par-5 18th.

Dunlap then made his move with three consecutive wins from the 27th hole to take a 2-up lead.

The momentum actually began on the par-3 26th hole, when he converted a 12-foot par putt to tie the hole and avoid going 2 down. He would tie the match on the ensuing par 5 by executing a pitch from rough left of the green and converting the 12-foot birdie putt.

Dunlap then grabbed the lead for good thanks to two consecutive three-putt bogeys by Trolio.

“I’ve won tournaments in the past, but nothing like this,” said Dunlap. “To win this year in Pinehurst on this golf course, I’ll remember it forever.”

There was only one Australian in the field, Adam Brady. The Western Australian missed the +3 cut following rounds of 76 and 75.