Duval back on the podium at Father Son Challenge

The duo, who led by a shot going into the second and final round, posted a 21-under par tally in overcast and windy conditions and win by a shot from the trio of Stewart and Connor Cink, Retief and Leo Goosen and Fred and Taylor Funk. 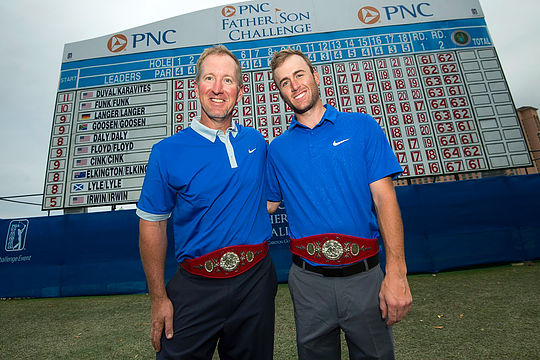 The effort not only earned Duval and his step son US$100,000 each but also the Willie Park championship belt – 15 years after being handed the famed Claret Jug for his victory at Royal Lytham and St. Annes.

Willie Park Snr became the first ever winner of the Open Championship at Prestwick in 1860 while his son, Willie Park Jnr captured the title in 1887 also at Prestwick.

“The only thing missing now is the Claret Jug,” said Duval when being informed of the prize.

In fact, the victory is the 45-year-old Duval’s first since the 2001 Dunlop Phoenix Tournament in Japan and a few months after won golf’s oldest Major, and the last of his 13 Major victories.

It was also Duval and Karavites fourth appearance in the event. Duval had become a step-father to Karavites in 2003 when Nick was then aged 13 and one of three children by a former marriage to Duval’s now wife, Susie Persichitte and who Duval had met in a Denver restaurant.

At that time, Duval was still tumbling down the World Rankings after having reached the pinnacle of the game in winning the 1999 Players Championship and in the process unseating Tiger Woods.

Duval also dealt with injuries and it’s little wonder he was pleased to finally again call himself a winner.

“This is as good as anything,” Duval said. “It truly is. I know it’s not winning The Players or something like that, but this is what the progression of life is. To be able to come out in a professional event and win and have the whole family here, I’ll never forget it.

“We came here to win and I had said to my wife, Susie before teeing up that the way Nick and I are playing we can win.

“So if we can continue what Nick and I had been doing back home in practice. So we came here from Colorado where the weather has not been the most co-operative but then we’ve had enough time to practice to put it together.

“I talked to Nick all day and we slowed it down and paid attention to what we were doing.

“So a lot of things fell our way and that is why we are standing right here with the trophy.”

“The way LJ played this week, I’m so proud of him,” said John. “He’s been clutch all week. It’s been a great week for me. The progress for him to see it under the gun, the way he performed, it was incredible.”

“We were a little better than yesterday but basically it’s what (Jackie) did,” said Nicklaus.