Kingston Heath was once again buffeted by strong winds and cold conditions for most of Friday’s second round four-balls at the World Cup of Golf but the conditions barely seemed to rattle Team Denmark, who stormed home with a final hole birdie to post an improbably round of 12-under par 60.

On a day when all but one team shot rounds in the 60s, the Danes – Soren Kjeldsen and Thorbjorn Olesen – combined exceptionally in the brilliant display with both players responsible for eagles on the front nine.

At the par-four 3rd, playing directly into the teeth of the wind, Kjeldsen holed a 6-iron from 140 metres for a two that was matched by Olesen when he chipped in from the swale fronting the par-five 8th.

The pair also posted eight birdies to sit in first place at 12-under, three clear of China, with first round leaders Spain alone in third place at 8-under.

“Yeah, it was great. I feel like we both were playing well actually,” Olesen said, “We kept the ball in play all the time and Soren got it started by holing that second shot. Amazing.” 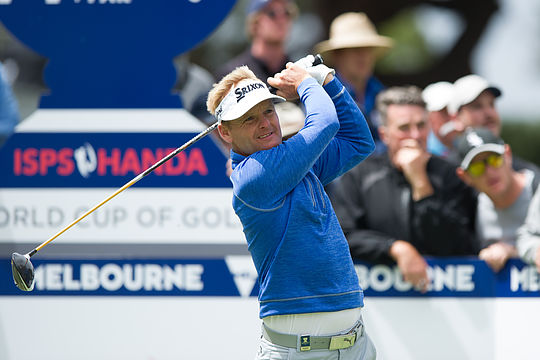 With an ounce of further luck, the pair might have brought a magical number in the 50s into reality as Olesen came remarkably close to holing three more shots from off the green on the back nine alone, at the par-five 14th, the long 16th and when putting from the fringe on 17.

“We kept playing solidly and gave ourselves a lot of chances,” Kjeldsen added.

“It seemed like if I hit a good shot, either Thorbjorn would hit stiff it or hit it outside me and then make the putt, so I didn’t get much putting practice.”

The Chinese pairing of Wu Ashun and Li Haotong are ominously placed with both players enjoying the format at the chance to not only represent their country in a World Cup, but to take the trophy home to China for the first time in their history.

The Australians, Adam Scott and Marc Leishman, have it all ahead of them over the weekend after shooting a four-under 68 to sit 10 strokes back of Denmark with today’s foursomes and Sunday’s four-balls still to play.

“(Saturday’s) a good day to close a lot of shots and give ourselves a chance on Sunday, so we need to sharpen up a bit” Scott said.

“We just need to get a bit of something going and it would be nice to get off to a good start and have a bit of a run at the board. You never know.”