Elliott, who trailed third round leader Ashlee Dewhurst by two, finished with rounds of 73-76-74-67 to win at 2 over par, seven ahead of Adriana Brent. 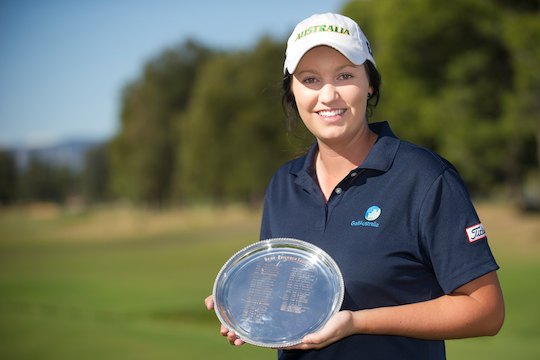 Elliott’s final round score of 5-under par 67 was a course record for Glenelg’s new Championship yellow course.

“This win is a real confidence booster for me after the Australian Amateur,” said Elliott who finished runner-up to New Zealander and world number one ladies amateur, Lydia Ko.

“To also get my first course record is bonus. All week I played well and in the final round was able to hole the putts and not record a bogey.”

“This will be great for my confidence, I’m off to Singapore for the Queen Sirikit Cup then back to Adelaide for the Interstate Series to represent Victoria before heading back to the USA.” Elliott added.

Third round leader and 2010 Australian Amateur champion, Ashlee Dewhurst, finished the Championship in fourth place after a final round 7-over-par 79 with Grace Lennon from Kingston Heath finishing fifth.