Ernie Els birdied the final two holes for a 6-under 66 and a one-stroke victory over Colin Montgomerie on Sunday in the SAS Championship on the PGA Champions Tour.

It’s the second Champions Tour title for Els in his first 10 starts, having won the Hoag Classic back in March. 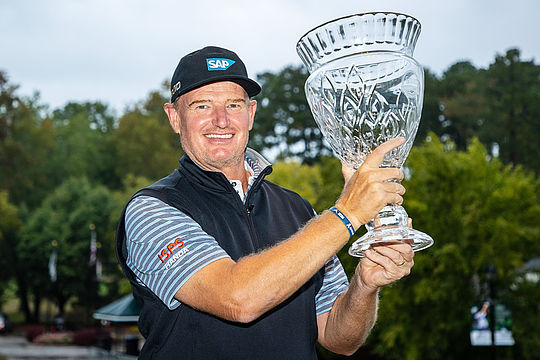 “I had 64 in mind,” said Els. “Especially in the final round, the guys, there were so many guys bunched. I was coming from 6 under, I reckoned 14 under was maybe a good score, but then the conditions helped out and it became really tough. So, 66 just squeaked in there.”

Montgomerie, who tied for the second-round lead with Darren Clarke and Woody Austin, parred the final four holes and was unable to capitalise on 18 when he hit his 160 metre approach 30 metres left. He shot a 70.

Els ended up at 12 under, one stroke better than Montgomerie.

For the eighth time in the 20-year history, the tournament’s winner is a past major champion. The South African has won the US Open twice and British Open twice.

Els, a World Golf Hall of Famer who turns 51 next weekend, was simple impressive all week with consistent scoring over the rest of the field. Until March’s Hoag Classic victory in Newport Beach for his first Champions Tour title, he hadn’t won on US soil since capturing the Arnold Palmer Invitational in March 2010.

Jim Furyk missed a chance to become the first player ever to win his first three PGA Tour Champions events, closing with a 70 to tie for ninth at 8 under, four strokes behind Els. Furyk’s previous wins came at Warwick Hills and Pebble Beach.

Phil Mickelson will join the Champions Tour ranks again on Thursday at the $2,000,000 Dominion Energy Charity Classic at The Country Club of Virginia.

The 50-year-old won his first start on the Champions Tour at the Charles Schwab Cup Series at Ozarks National in August.