Els, 43 became the oldest-ever winner of the event posting a last round three under par 69 to win by a shot on 18-under par. 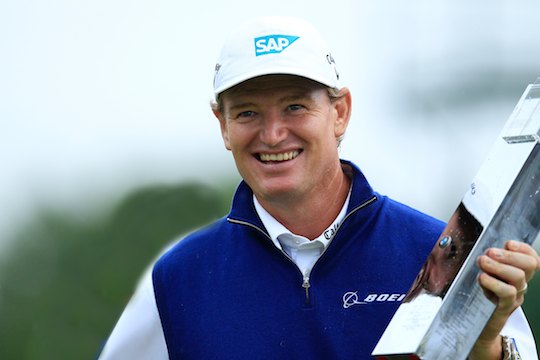 Denmark’s Thomas Bjorn, winner of event 13 years ago, was left to count the costs of a 14th hole double bogey in signing for a score of 69 for a 17-under par total

The win is Els’ 68th worldwide and comes just four weeks before the defence of his (British) Open Championship at Muirfield.

“Winning this championship will just give me so much confidence going into the Open Championship,” he said.

“Winning wire-to-wire means you have all the pressure of sleeping each night on the lead and with guys chasing you, so it’s been quite a week for me as there was some really great players in the field.”

“And for being the oldest winner, I was looking at the trophy and seeing Miguel Angel Jimenez’s name there, and I guess given he’s still only 49 he must have won it 10 years ago (smiling).”

“But it’s just great to finally get my name on this wonderful trophy.”

In fact, Els is five years older than the previous oldest winner in Zimbabwe’s Mark McNulty, who won the event in 1994.

Els, who also captured his first win of the year, intends taking a break from competition and while he’s entered the July 11th commencing Scottish Open, an event he won in 2000 and 2003, he hinted he may very well withdraw from the tournament at Castle Stuart.

Denmark’s Thomas Bjorn, winner of event 13 years ago, was left to count the costs of a 14th hole double bogey in signing for a score of 69 to finish in second place on 18-under par.

Bjorn has withdrawn from the 36-hole Open Championship qualifier at Walton Heath in Surrey to instead focus on next week’s Irish Open at Carton House, and where he won the 2006 Irish Open when last staged at the course.

The Dane began the last round one behind Els and moved into the lead with three birdies in succession from the third hole.

However he came unstuck at the par four, 14th when forced to take a penalty drop after finding trees with his drive.

“I got off to the start I needed and got right in front, but the club that’s been great this week has been the driver and it let me down on the back nine,” he said.

“But when you go up against Ernie, you’ve got to take it 18 holes to the end and I didn’t quite do it today.”

“I’ve played a lot of golf with Ernie over the years, and he did all the stuff on Thursday with that score of 63 and he just hung in there from there and put in some solid rounds.”

French rookie Alexander Levy carded a final day 71 to take third place at 16-under par and in the 22-year old’s best Tour finish in just 14 appearances.

Visiting American Dustin Johnson returns to the PGA Tour after a final round 66 for a share of 18th place at 12-under par.