Ernie Els has taken out the Hoag Classic for his first PGA Tour Champions title, birdieing the par-5 15th and 18th holes for a two-stroke victory at Newport Beach Country Club on Sunday.

In only his third start on the Champions Tour, the 50-year-old South African closed with a 4-under 67 to finish at 16-under after opening rounds of 66 and 64. 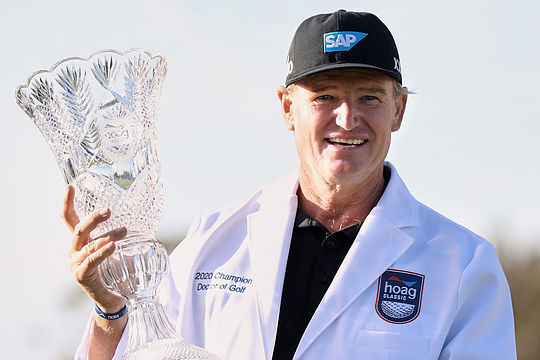 Els in his previous starts had lost a playoff to Miguel Angel Jimenez in his debut in the season-opening Mitsubishi Electric Championship in Hawaii, then tied for 34th last week in the Cologuard Classic in Arizona.

It was his first victory since 2013, when he won the European Tour’s BMW International Open, a year after he won the 2012 British Open, his fourth major championship.

“I felt a little uncomfortable on the greens,” said an elated Els.

“I didn’t have that free-flowing feeling, I had to work hard for it and that’s a good thing to do, to work hard for something. You don’t want something falling in your lap. I’m glad the first one’s over with and we can move on now and it gets more comfortable after this.”

“After being in a playoff in Hawaii, coming close to winning there, I didn’t want to mess this one up.”

The victory adds to Els’ four major championships, 19 PGA Tour victories and 47 international titles. Other highlights in Els’ career include topping the 2003 and 2004 European Tour Order of Merit and winning the World Match Play Championship a record seven times.