Spain’s Nacho Elvira defeated Justin Harding in a play-off to win his first European Tour title at the 2021 Cazoo Open in Wales.

Elvira, 34, entered the final day at The Celtic Manor Resort with a six shot lead which quickly evaporated following a string of three bogeys on the opening nine to be even par at the turn and then to card two more on the back nine to finish even for the final round. 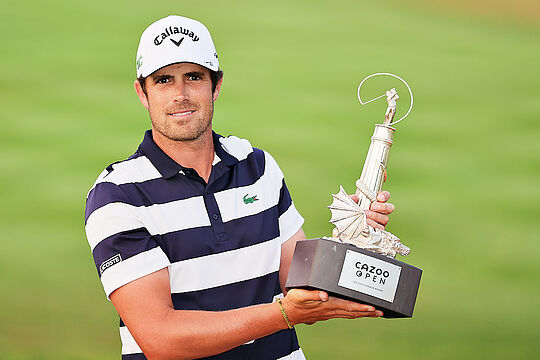 Meanwhile Harding was on fire carding a blistering bogey free final round of 6-under-66 to make up the ground.

“I thought I had it all pretty much under control and to be honest I got pretty nervous on the last couple of putts on the regular 18th,” said Elvira. “I was more calm in the playoff than I was on 18.”

Both players hit the green in three on the first playoff hole, the par five 18th, and after Elvira missed a birdie chance to win it from nine feet, Harding completed a three putt from 24 feet to hand Elvira the victory.

“It means the world,” said Elvira after the win. “That’s what we practise for and what we strive for. We try to win, to be at the best level on the European Tour and play with the best. It means the world to me.”

Elvira’s win comes at his 195th attempt following three second place finishes on the European Tour, two of them coming via a playoff.

Mikko Korhonen finished in 3rd position at 15-under, one shot short of making the playoff. Callum Shinkwin was fourth at 14-under, with Masahiro Kawamura rounding out the top-5 finishing at 12-under.

Wade Ormsby finished the best of the Australians in a share of 10th position at 8-under, eight shots behind the winner Elvira. Deyen Lawson carded a final round 69 to close in 32nd position, with Maverick Antcliff in a share of 40th.

Bryden McPherson finished in 47th place at 1-under, with Brad Kennedy and Scott Hend rounding out the Aussies making the cut.

The much touted Elvis Smylie missed another cut after rounds of 74-71 with the Queenslander yet to make any impression so far in his European campaign despite the considerable coverage many commentators have made about him being the next best thing for Australian golf.

It was also announced the 2021 Nedbank Golf Challenge will not take place as a result of the restrictions placed on events and spectators in South Africa due to the coronavirus pandemic.