Versailles, France: Thailand’s Thongchai Jaidee has become the oldest and first Asian-born winner of the French Open since the event became part of the European Tour in 1972, beating the previous mark of Miguel Angel Jiménez, who was 46 years and 180 days in 2010.

The 46-year old showed his more younger rivals how to find the shortest route around the 2018 Ryder Cup venue winning by four shots with a 68, despite his only bogey at the last, for an impressive 11-under par tally on the Le National course. 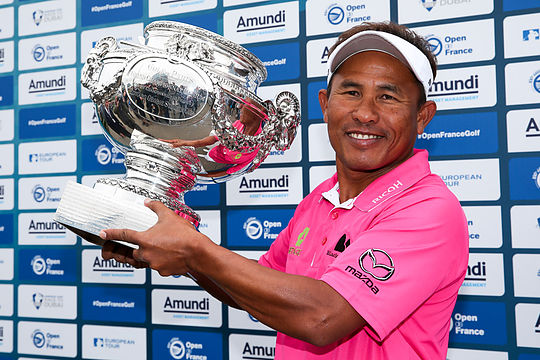 It is Jaidee’s 19th victory worldwide and his eighth on the European Tour while it’s also his fourth straight success on the European continent after capturing the 2012 Wales Open, 2014 Nordea Masters and last year’s European Open in Germany.

The win also will send the very affable Jaidee to a career high of No. 25 in the Official World Rankings.

“I didn’t think I would win as all I wanted to do was try my best and especially with Rory starting two shots behind me,” he said.

“But then I played my own game found the fairways and putted very well on a very tough golf course, so I have played great for four days and I am very happy.”

“It’s also my son’s birthday so is a great present for him for me to win.”

With his victory Jaidee takes home his largest European Tour prize of €583,330 and also extends his European Tour exemption until the end of the 2019 season.

Italy’s Francesco Molinari finished in outright second on seven-under and four shots off the pace.

Rory McIlroy was another shot back in outright third after failing to get his game in to gear across the weekend. The former Open winner now has ten days to rid new swing gremlins from his game if he’s to capture a second Claret Jug in three years.

McIlroy will spend two days this week at Royal Troon familiarising himself with the only course on the Open Championship rota he’s not played.

“It’s been a good week, just to see where I’m at with my game,” he said. “There were signs that it was really good and heading in the right direction and then today, again, there were some times that it was good.”

“But there were a few swings I made on the back nine that I need to work on. I was getting quite steep with my irons, which has been a problem anyway. So I just need to try to work on that going forward.”

“I’ve got ten days until the Open starts. I’m going to be working every day to try to get better and play a bit of links golf and work on the shots that I’ll need for Troon.”

Scott Hend was the only Australian on the leaderboard on Sunday and finished a distant T56 following weekend rounds of 79 and 72.