England’s David Lynn has ended a 9-year winless drought in sensational manner with a closing round of 63 to capture the Portugal Masters.

A week after being laid low by a virus at the Seve Trophy by Golf+, where he was swiftly dispatched 6 and 4 by Miguel Angel Jiménez in the Sunday singles as Continental Europe beat Great Britain & Ireland, Lynn had completely contrasting emotions in the Algarve as his 18 under par total saw him finish a shot clear of Justin Walters. 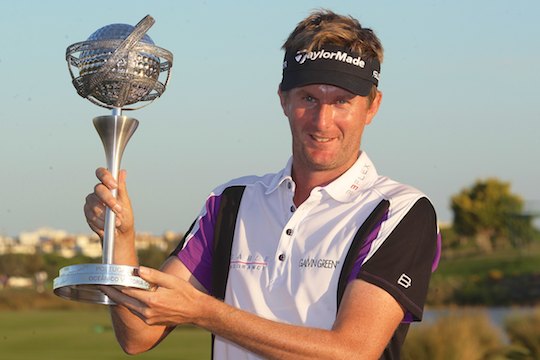 Lynn’s second European Tour title sees him climb back into the Official World Golf Ranking’s top 50 a week before his 40th birthday.

The 2011 US PGA Championship runner-up, whose only previous win in almost 400 events came in the KLM Open in 2004, charged into contention with five birdies in a front nine of 30 and, after a bogey at the tenth, picked up further shots at the 11th, 14th, 15th and 17th to set a clubhouse target that was never matched.

An emotional Walters, who began the week 126th in the Race to Dubai, holed a 40 foot par putt on the 18th to claim outright second on 17 under and secure his card for next season, the South African breaking down in tears following the death of his mother two weeks ago.

Lynn – who began the week 52nd in the Official World Golf Ranking – held a two shot lead playing the last but admitted his heart was in his mouth as his approach looked set to find the water short of the green. It ended up clearing the hazard by a matter of feet and two putts later he had completed what proved to be the winning round.

“I don’t know if I can talk much right now,” the 32 year old from Johannesburg said. “Coming into the week I really didn’t have any goals or ambitions, I just wanted to play and honour my mum and make her proud.”

“I don’t think I have the words for it just yet. Maybe after a drink with my dad who is here with me we can fully take it all in, but at first glance I don’t know how I did it. I am super proud and so happy I could honour my mum. That feels the best for me right now.”

England’s Paul Waring held a two shot lead going into the final round but saw his hopes disappear with a double-bogey five on the 16th, although birdies on the last two holes gave him a share of third with Scot Stephen Gallacher (66) and Wiesberger (67).

Scott Jamieson, who came agonisingly close to the first ever 59 on The European Tour on Saturday, led by one when he birdied the second and fifth, but dropped three shots in four holes from the 14th to card a closing 72 and finish joint 13th.

Richard Green topped the two-man Australian field in Portugal this week after firing a final round 65 to close the tournament in a tie for 17th.

Andrew Dodt finished in equal 63rd following a disappointing final round of 73.