Kyle Stanley holed a two-metre par putt to win the Quicken Loans National in a playoff over Charles Howell III on Sunday for his second PGA Tour victory.

Stanley and Howell began the day four shots off the lead, playing together three parings behind the leading group. Stanley got into the championship with birdies on the fifth, sixth and eight holes with precision iron play to set up his closing birdie barrage.

Howell had a share of the lead momentarily with a 19 metre eagle putt on the short par-4 14th, only for Stanley to match him with a two-putt birdie.

Both parred the final four holes to shoot 4-under 66 and finish at 7-under. Stanley took advantage in the playoff even after pushing his tee shot out to the right. He found a good lie, and Howell made bogey from the fairway.

“It means a lot,” said an emotional Stanley following his victory.

“I’ve had so much help from my coaches, my family and my wife. It’s confirmation we’ve been working on the right things. If anything, it will make me hungrier to get to work. It means a lot to me and to my team.” 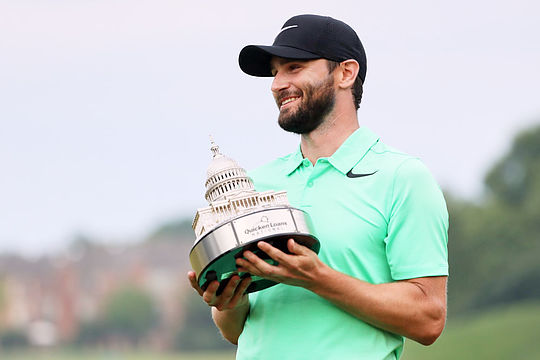 Stanley’s previous win came in 2012 at the Phoenix Open. Later that year, he was ranked a career-best 47th in the world. He declined steadily after that, bottoming out at No. 683 in May 2015.

Stanley has been playing consistent golf of late with a T6 at the Memorial Tournament and a T4 at The Players Championship. Stanley, at 29, makes it 20 wins this season for players in their 20s. Sunday’s win sees him also qualifying for The Open at Royal Birkdale in a fortnight’s time.

Rickie Fowler finished in a tie for third along with Scotland’s Martin Laird at 5-under, two behind the leaders. Fowler shot nine birdies but his chances were undone by a double bogey on the reachable par-4 14th, one of the easiest holes on the course.

TPC Potomac has now been crowned the toughest test (in relation to par) this season.

The winning score of 7-under becomes the worst total of the season to par and just the second in single digits under par after Sergio Garcia’s 9-under at the Masters back in April.

A fortnight after the usually brutal US Open was won at 16-under, the Quicken Loans championship proved a stern test for the field. Only 25 players ended the week under par.

Marc Leishman was the best of the Australians closing with a final round of 66 to finish at 4-under and in a share of fifth position along with fellow Aussie, Curtis Luck. Overnight leader David Lingmerth stumbled home with a three-over 73 to finish with the Aussies.

Geoff Ogilvy finished at 3-under to secure a top-15 result with Matt Jones finishing at 3 over to be in a share of 38th position. Cameron Percy finished in a tie for 46th position with Greg Chalmers, Rod Pampling, Aaron Baddeley and Ryan Ruffels all missing the 4-over cut mark.