Harrison Endycott withstood a late hiccup on the final hole to win his second national ranking event with a one stroke win over New Zealand’s Henry Spring to win the Riversdale Cup in Melbourne.

Endycott finished at 14-under-par to secure the title to add to his earlier win at the Lake Macquarie Amateur and his third tournament victory after winning the Avondale Medal in January. 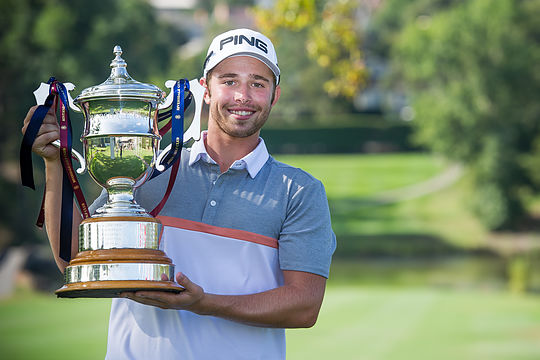 Entering the back nine at Riversdale on Sunday Endycott was locked in a dual with the fast finishing Spring who fired an impressive closing round of 5-under-par 67. Prichard also had posted an earlier 6-under-66 to be in the clubhouse at 11-under along with Gale.

Birdies on 12 and 13 had given Endycott a one stroke buffer and when he stiffed a lob wedge to three feet on the par-5 15th for a certain birdie, he enjoyed a two shot lead with three holes to play.

Regulation pars on the 16th and the difficult par-3 17th saw Endycott in the box seat heading down the short par 4 18th.

Riversdale’s 18th at 282 metres might not be long, but its a hole that seems to always produce drama. Last year Lucus Herbert squandered his chances of winning the title with loose golf on the final hole which opened the door for Travis Smyth to snatch the win.

Endycott certainly did not play loose golf coming down the stretch but when a wayward drive on the last finished just off the cart path right of the green he was faced with a delicate pitch under an overhanging branches to a green that was slopping front to back with the pin tucked tight on the front left.

When his approach clipped the overhanging leaves Endycott’s ball finished plugged in the right green side bunker with a terrible lie. The drama continued when his bunker shot skidded across the ever slick green to rest on the fringe some 20 feet from the hole.

Endycott had to get down in two to prevent another playoff.

His putt slid by the cup leaving a nasty four footer above the hole for the win. The tension was clear on his face, yet Endycott rolled a beautiful putt to centre cup to secure the win.

“That’s not the way I wanted to finish,” said Endycott.

“I got a bit unlucky, yet I held it together and didn’t play my way out of the tournament. This is a great win for me and I’m really wrapped to win another title.”

Endycott had started the round in the final group alongside defending champion Travis Smyth and Curtis Cluck. The three locked at 11-under and the title up for the taking. To Endycott’s credit he held his composure as the pressure mounted closing the back nine with three birdies the bogey on 18 his only blemish, yet the victory was his.