Harrison Endycott secured his breakthrough US victory winning the Porter Cup at Niagara Falls Country Club by a stroke over American Gavin Hall.

Following wins at the Riversdale Cup, Lake Macquarie Amateur and the South Australian Amateur Classic, all local Australian amateur tournaments, Endycott was overjoyed to win in a top international amateur tournament firing a 14-under par total following rounds of 69-64-67-66. 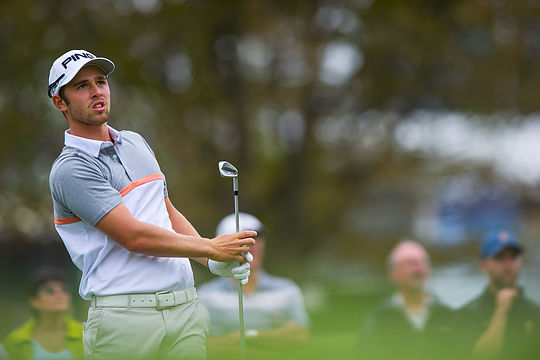 “I had a runners-up at the Players Amateur a few week’s back here in the US, but to win today against a field like this is a great confidence booster leading into next week’s Western Amateur,” said Endycott, who also finished runner-up at this year’s Malaysian Amateur.

“I was four back going into the final round here today and to claw it back to nail this victory is very satisfying. I made some great 40 footers on the 14th and 16th which helped and was able to finish strongly. I said to my caddie Dave my mate from Avondale, ‘We need a solid finish on the 13th’ and we were able to do it.”

The field at this year’s Porter Cup was full of talent. Hall had finished runner-up five times before and was at the doorstep of his maiden US amateur event following a runners up finish at the 2015 Western Amateur medal.

Yet Hall was to three putt the 16th to bogey the hole, while Endycott birdied the hole to take the lead. It was a lead he would never relinquish.

“I was pleased with the way I was able to close this event out,” said Endycott who played the last seven holes at 3-under.

“I was able to execute the shots that I wanted today and kept aggressive when I needed to. Over here you are kind of the underdog and to win against such a strong field is a real confidence booster.”

Endycott’s next tournament is the Western Amateur to be played at Knollwood Club in Lake Forest north of Chicago later this week.

The field in Chicago is nothing short of impressive with six participants having played in the US Open at Oakmont in June and nine having qualified for at least one of golf’s major championships played over the last two years.

“I’m really looking forward to giving the Western Am a go,” says Endycott.

“My confidence is at a high and I feel that I can compete against the world’s best here. Mentally, I am as strong as the others, and game wise I feel my ball striking is right up there.”

Travis Smyth was the next best Aussie in a tie for 11th position at 1-under, with Austin Bautista at 5-over and a tie for 38th position.

Aussies have enjoyed success at the Porter Cup previously with Geoff Drakeford winning in 2014 to make it two wins in three years for the Australians.