Harrison Endycott has recorded one of his best finishes on the Korn Ferry Tour with a 5th place result at the Louisiana Open. Endycott finished at 14-under-par after rounds of 67-70-68-65, four shots short of the eventual winner Mexico’s Roberto Diaz.

Endycott, 24, first joined the American secondary tour in 2020, following a two year stint on the PGA Latinoamerican Tour where he finished 39th on the 2019 Order of Merit after making seven cuts and posting three top-10 finishes. 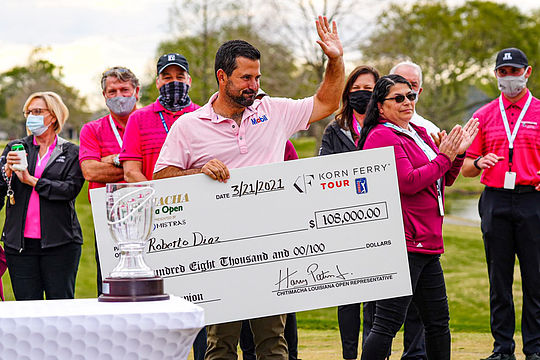 “Any week out here, a big week is crucial and it can change your life…it’s hard because you don’t know what people are thinking or feeling.”

“You have to be optimistic, you can’t think you’re not in and that’s why I travelled here – I have to prepare like I am in,” said Endycott about life playing on the edge of the Korn Ferry bubble.

This season, Endycott has played 18 Korn Ferry Tour events having made the cut 13 times including two top-10′s and three top-25′s to be ranked 84th on the Order of Merit.

Aaron Baddeley was the next best finisher in Louisiana sharing 23rd position, with Curtis Luck in a tie for 63rd position and Jamie Arnold in 66th.

Diaz shot a final round 68 to edge out American Peter Uihlein for his first Korn Ferry win.

Prior to his victory, Diaz had been a professional for 13 years and accumulated 193 starts across the PGA Tour, Korn Ferry Tour and PGA Tour Latinoamérica. He had earned four runner-up finishes in that time (three on Korn Ferry Tour, one on PGA TOUR Latinoamérica) but have never won.

Diaz moves to 9th in the Korn Ferry Points standings and put himself in a good position to earn a PGA Tour card at the end of the season.

Brett Drewitt is the highest Aussie on the standings at 21st and inside the desired top-25. Curtis Luck is ranked 31st, with Ryan Ruffels 68th and inside the top-75 qualifiers who play the season-ending finals.

Brett Coletta narrowly sits outside the top-75 in 78th position, with Endycott moving up 20 places following his great result on Sunday to be 84th.