Harrison Endycott withstood a spirited challenge from Travis Smyth to win on the second playoff hole to claim the City of Sydney Amateur International on Saturday at Moore Park.

Endycott finished equal with Smyth at 2-under after a third round 64 elevated Endycott into contention. 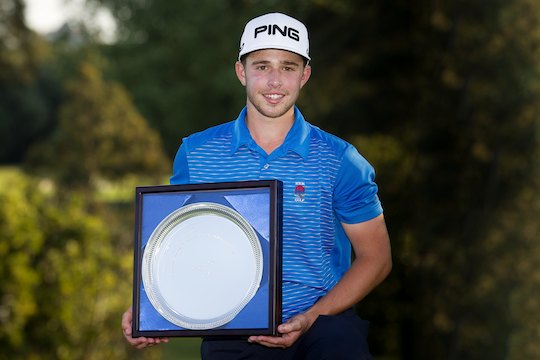 Smyth had his chances to claim the R&A World Amateur ranking event when he headed down the last hole on 3-under, only to finish with a bogey.

Both parred the first playoff hole then Endycott smashed his drive to the left centre of the fairway to be in pole position after Smyth had driven into trouble on the left and was forced to chip out.

Endycott’s second into the 18th at Moore Park was 204 metres to the flag against a strong north-easter which was guarding the tight back left pin.

A majestic 2-iron to eight feet right of the hole left Endycott with an easy up-hill putt after Smyth had earlier flown the green for three.

After Smyth was unable to get his chip close, Endycott was left with two putts for victory and he made no mistake edging his first putt to a foot of the hole.

“To be honest, I thought I was out of the event as I was 4-over through two rounds. The 64 in the afternoon certainly was one of my better rounds and it’s great to get a win so early in the season.”

Troy Moses finished at even-par for the tournament to be in third position after rounds of 67-74-69, with Michael Pearce in fourth at 1-over.

Pearce had held the better part of the third round lead and at one stage had got as low as 4-under, but costly mistakes over the closing nine coming home dashed his chances for victory.

By the last Pearce was at 1-under and needed a birdie to get into the playoff. He finished with a double and a closing round 74.

The staging of the tournament is a credit to the organisers and sponsors of the City of Sydney International in an environment where numerous main amateur events struggle or have dropped off the map in recent years.

In recent times Jake Higginbottom won in 2012 in a playoff against Dimi Papadaos after both finished at 5-under-par.

Higginbottom and Papadaos have since turn professional and have gone on to win on tour. Last year Alex McCoy from Queensland was victorious.