What a coincidence that Richard Bland should tee-up in just his second US Open ranked 115th in the world.

A month ago, Phil Mickelson captured a sixth major championship at age 50 and 11 months, and was also 115th in the world.

A week later, there was not a dry eye at The Belfry or among the millions watching on TV when Bland ended a 478th winless drought in capturing a maiden European Tour title with his British Masters play-off success.

Now in just a handful of tournaments since those emotional scenes, Bland is this time in real contention and at the game’s highest level. 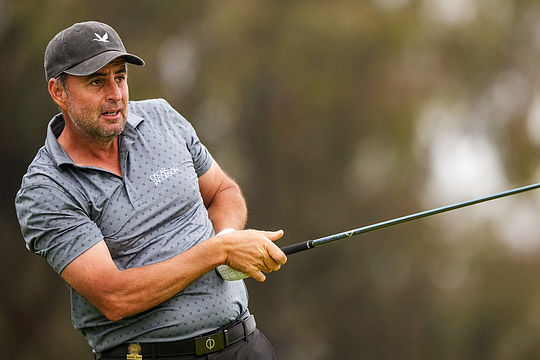 Now 12-years on and Bland is competing in just a fourth career major.

And without a major sponsor, meaning no cap or bag deal, Bland has quietly put himself in position to win at the game’s highest level in emerging from a mist that had engulfed the course throughout the morning, to post a four-under par 67 and end his round in the clubhouse leading at five-under par.

“I knew my game was pretty good. I was coming off a couple of good results, a win and a third in Europe,” he said.

“I was feeling pretty good about my game. I’ve been driving the ball well for five, six weeks now, which is the cornerstone if you’re going to put up a fight for a U.S. Open.”

“When I saw this place on Monday, I kind of — yeah, it kind of set up to my eye. There’s not too many sort of doglegs. It’s all there just straight in front of me, and that’s the kind of golf course I like. There’s nothing kind of jumping out and grabbing you or anything like that.”

“When I saw the course Monday, yeah, you know what, I thought, I can play around here.”

Play he has with Bland now generating enormous media attention.

He was asked about the simple-looking cap he wears that sports a swan.

“This is just like my golf club back home, The Wisley”, he said. “I don’t have a hat kind of deal at the minute. So if anyone is offering…”

“But yeah, I kind of said to the golf club, look, it would be quite nice if I wore the hat, and they gave me sort of like 10 hats to come out here with, so yeah, it’s just the golf club that I’m a member at back home.”

There was a number of other ‘get to know him better’ questions along with a question asked of him since his victory at The Belfry, and asked if he had a theory why golf’s ’50-something’ players were performing so well.

“I think when you look at it, you look at kind of Lee (Westwood) and Stewart (Cink) and Phil (Mickelson) — okay, Lee is not quite — unfortunately he’s not got his major, whether that comes this week or sometime in the future, I’m sure what Phil did has given Lee a huge sort of confidence boost in that way, that okay, his major career isn’t over”, said Bland.

“Stewart has won a major and Phil has obviously won I think six now, so they’ve been world-class players for a long, long time. You don’t lose that overnight. It’s the old saying that class is permanent, and that is with them.”

“I played 18 holes with Lee on Monday, and he still hits it as good as anybody. I think as we’ve all known with Lee, if he chips and putts well, then he’s going to contend because he’s still probably right up there tee to green as one of the best in the world.”

Given all the sadness in the world in these continuing uncertain times, golf has produced some wonderful stories and Richard Bland’s success a month ago is up there among the best.

What a sports story it promises to should ‘Blandy’ do the unthinkable at Torrey Pines.