England’s Garrick Porteous has become the first English winner since Gary Wolstenholme to claim the British Amateur Championship with his 6&5 win over Finland’s Toni Hakula at Royal Cinque Ports near Kent.

Porteous, a graduate of the University of Tennessee and the tough US collegiate circuit, moved ahead after losing the opening hole to a four hole lead after nine and never let the Finn into the match. 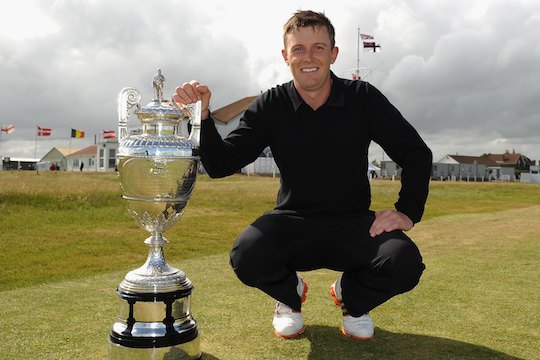 “I know there are a lot of famous names on that trophy. To be along side them is pretty humbling. I felt confident coming into the week but I never got ahead of myself. I just played one shot at a time and it worked.”

The victory secures Porteous a place at next month’s Open Championship, a start at next year’s US Open and the traditional invite to the Masters.

“I think it will hit me next week when I realise I will be playing in The Open,” remarked Porteous.

“It is just over an hour away from my house so there will be a lot of local fans coming out to watch. I played Muirfield four years ago in the Amateur and it will feel pretty special to tee it up there in The Open.”

Strong winds made for brutal conditions in the scheduled 36-hole final. Steady winds of around 25-35 mph, with gusts reaching 50 mph, turned the final into a grind.

“It was tough,” said Hakula, a senior at the University of Texas.

“A lot of bogeys won holes. I thought if I could make a couple of putts it could have been closer. I missed a lot of short ones. That put me back so far that it was hard to get back ahead. It’s hard to come back when you can’t make birdies in that weather.”

Applying a stroke count, Porteous made the 18 hole turn to a score of 82, two better than Hakula.

Starting the afternoon round with a three-hole cushion, Porteous slipped up at the 20th hole, but a par at the 21st was enough to restore his momentum.

A birdie at the 23rd after he got up and down from just off the green, took Porteous to 4up with the championship title in his sight.

A birdie on the 28th hole took Porteous to 5up and, although Hakula took the next with a birdie three, the Englishman was in control and a bogey on the 31st was enough to seal the victory.

“I can’t quite get to grips with it right now. It might take a couple of days but it’s a massive achievement for me.”

Porteous is ranked 13th in the world and earlier in the month won the Scottish Open Amateur. He was also quarter-finalist at the NSW Amateur back in March.

Hakula is ranked 36th in the world and in 2011 made the semi-finals of the Western Amateur. His result at these championships the best the Finn has achieved to date.

Jordan Zunic finished the best of the Australians making it through to the top-16 on Friday, before losing his match against Englishman Max Orrin, 3&1.