In any other year, Justin Thomas would be celebrating back-to-back wins at the Sentry Tournament of Champions instead the spoils went to Harris English with a playoff win over Chile’s rising star Joaquin Niemann, in Hawaii this morning.

While the Sentry field is normally made up of tournament winners from the previous season, the COVID-19 riddled 2019-2020 schedule meant that players had to be included from the top-30 of the Tour Championship and both English and Niemann took full advantage of that break.

In fact, four players from the top-5 were made up of Tour Championship entries with only Sungjae Im and Justin Thomas winning last season.

English now has three PGA Tour titles to his name and his first since the 2013 Mayakoba Classic, which was his second win that year following victory at the FedEx St. Jude Classic in June.

“It’s incredible. It’s been a lot of hard work over the years and you never think you’re going to get here again. I won twice back in 2013 but it’s hard to win out here,” said an emotional English holding back tears.

“I had a really good chance this week and felt good about my game and you just have to get it done. It’s a little bit of a monkey off your back having two plus years of job security out here…it’s awesome.” 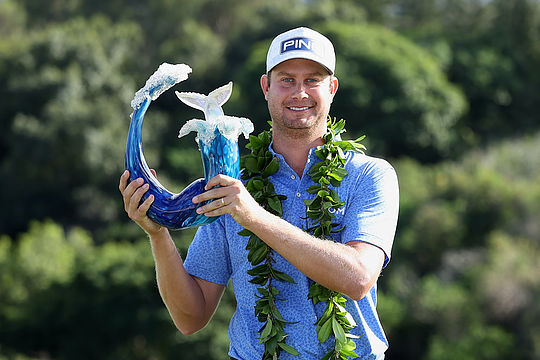 The tournament could have gone so many different ways – a dropped putt here and there from any of the leaders could have meant an outright win or a different playoff scenario.

English missed a 3-metre putt for an outright win at the 18th hole, Niemann earlier pulled his approach at the last and missed his birdie putt. And defending champion, Justin Thomas, had chances at the 16th and 17th that would have seen him in with a chance.

What’s In The Bag: Harris English

Thomas settled for outright third following his round of 66 while third-round co-leader Ryan Palmer closed with a 71 to finish two shots back thanks mainly to a harrowing double-bogey at the par-3 11th.

World No.1 Dustin Johnson couldn’t get much going in his first tournament back on Tour since his Masters win in November and finished in a tie for 11th with a round of 69 – his first result outside the top-10 since early August last year.

Adam Scott failed to capitalise on an opening 68 and finished the best of the Aussies in a share of 21st place at 15-under with Marc Leishman and Cameron Smith a shot further back in 24th place.

The PGA Tour stays in Hawaii for the first regular tournament of the season at the $6.6 million Sony Open, which was won last year by Cameron Smith in a playoff with Brendan Steele.