Two birdies in his final three holes were enough for 23-year-old Harris English to secure a two-shot victory and his first PGA Tour win at the FedEx St Jude Classic.

English finished at 12-under-par, two ahead of Scott Stallings and Phil Mickelson. 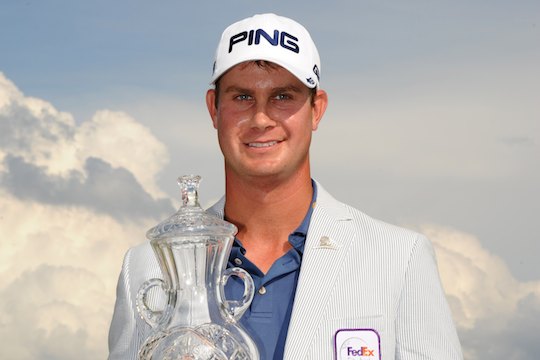 Harris English poses with the winner’s trophy after the final round of the FedEx St. Jude Classic (Photo: Stan Badz/PGA Tour)

“That was my first time holding the lead in a PGA TOUR event, especially after 36 holes,” said English following the victory.

“I felt very, very comfortable, very calm out there. I was glad I had a two-shot lead on that two-footer I had because my hands were shaking. I couldn’t feel them and I was just hoping that ball goes in the hole.”

English was still an amateur when he won on the Web.com Tour at the Nationwide Children’s Hospital Invitational in July 2011, and he moved to the PGA Tour in 2012 and finished 79th on the money list.

This year, he already has three top-10s, including his best finish before Sunday’s victory – a tie for sixth at the Zurich Classic in New Orleans.

“I don’t think I’m in the Open next week. So I’ll go back to Sea Island and hang out a little bit and probably play Travellers and AT&T and kind see where it goes from there.”

“This kind of changes the way I play this year. I’m trying to get up to the top of that FedExCup list and hopefully I’ll have a run at that and this win really opened some doors for me in golf tournaments.”

Robert Allenby and Nick O’Hern finished 10th to be the Australians. Stuart Appleby fired a closing round 70 to jump 10 places into a share of 39th position, with Nathan Green opening with a 66 only to finish back in a tie for 66th position.

While English’s victory doesn’t give him a berth in this week’s US Open at the Merion, he has secured a spot in the field at the 2014 US Masters.

“The main thing that I am looking forward to is playing the Masters next year,” said English.

“Growing up in Georgia, I mean that was the main tournament that I always watched and went to when I was a kid.”

“The invitation to the Masters is going to be very special and special for my family because they’ve put a lot of hard work and a lot of time and to get me where I am.”