Harris English collected his second win on the PGA Tour this season surviving a record-breaking 8-hole playoff to beat Kramer Hickok and win the Travelers Championship.

It was the fourth PGA Tour career victory for English, who finished third at the US Open last week and fourth in the pandemic-delayed US Open in September 2020. He won US$1,368,000 and 500 FedEx Cup points in the process on Sunday, moving into second on the standings.

English shot a final-round 5-under 65 and Hickok recorded a 67, each posting 13-under at TPC River Highlands in Cromwell, Connecticut. English won the Sentry Tournament of Champions in Hawaii to begin the calendar year.

“It was a battle on the back nine,” said English. “My putter kept me in it and the playoff as well. I made some solid putts and was very confident. I put some extra work in on the putting this morning because I knew how crucial some of the putts were going to be, and it came through for me.”

What’s In The Bag: Harris English

The eight-hole playoff was a record for the tournament, which went seven holes in 1961 where Ted Kroll took the title and again in 1962 with Bob Goalby winning, when it was known as the Insurance City Open.

English becomes the fifth multiple winner on the PGA Tour this year. 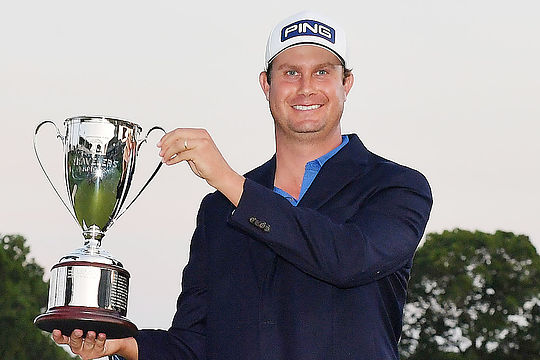 Bubba Watson, a three-time Travelers champion, was headed for a fourth title when he suddenly blew out over the final stretch. The 42-year-old multiple major winner held a one-shot lead at 13-under on the 14th tee and went 6-over in the final five holes to finish with a 3-over 73.

Watson’s collapse left Hickok, his 54-hole co-leader, on top at 12-under with English and Aussie Marc Leishman, who had finished his round with a 64 two hours earlier.

Leishman won the tournament in 2012, shooting a 62 on Sunday to come from six strokes behind and earn his first career victory on the PGA tour. This year, he shot 64 in the final round to move 14 places and was the leader in the clubhouse for several hours at 12-under but had to settle for third.

Day, who has been battling injury, was well in contention following rounds of 69 and 62 before back-to-back rounds of 70 proved not enough across the weekend.

Matt Jones took 36th position and Cameron Percy finished in a share of 54th position to round out the full Australian contingent that made the weekend.