And you thought you did it tough in your Saturday medal round losing 4 balls!

Spare a thought for players we would gladly regard as being among the best players in the world who were, well, shot down in flames at last weekend’s Bahamas Great Exuma Classic on the Web.com Tour. 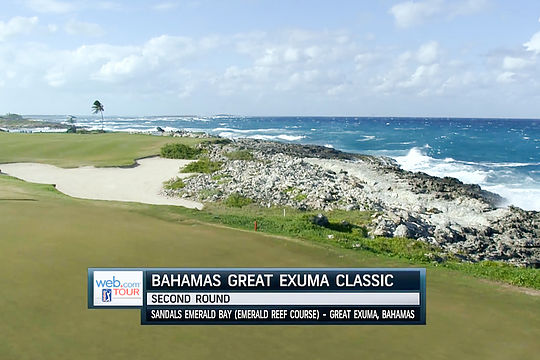 Big-name players and former PGA Tour winners like Jonathan Byrd, Robert Allenby, Jason Gore, Luke Guthrie and Brendon De Jonge found the going too tough and most of them missed the cut…and might have been glad they did.

Others battled on and records were broken in a week to remember, with American Kyle Thompson winning the event after finishing the only player under par.

Conditions were nigh on impossible with winds whipping up to 40 miles per hour and players battling to keep their cool in this holiday resort city in the Bahamas.

It was the highest-ever cut line in a Web.com Tour event for a start, with 11-over-par enough to get you through to the final two rounds.

That mark broke the previous record of 10 over set at the 1991 South Texas Open.

Yet that was not the most staggering sat of the week.

How’s this for a shocker?

Lanky Englishman Greg Eason shot 91-95 to finish last of the players who battled on and refused to withdraw.

And he later tweeted that he had lost 32, yes, 32 golf balls in the process.

“I started with 36 golf balls and I ended up with four…but I didn’t quit,” he said.

His back nine was actually much more palatable with a bogey-par start before another quintupled bogey (a nine) at the 12th and six straight pars to finish with in his 23-over-par 95.

Eason will have plenty of admirers just for that effort.