Starting three behind third round leader, Jordan Zunic, Evans played flawless golf over the closing back nine with critical birdies on the 15th and 17th to give the Englishman a two stroke buffer coming down the 18th to card a 7-under-par total.

Zunic, who was looking for his first major amateur victory since the 2013 Tasmanian Open, fired a closing 2-over-par 74 to finish in 4th position at 4-under.

Evans becomes the first English winner since Adam Gee won in a playoff from Jason Day in 2006.

“I came into the tournament with some form from Adelaide,” said Evans, who fired a course record around the Greg Norman designed East course at The Grange to be top-qualifier for the Australian Amateur. 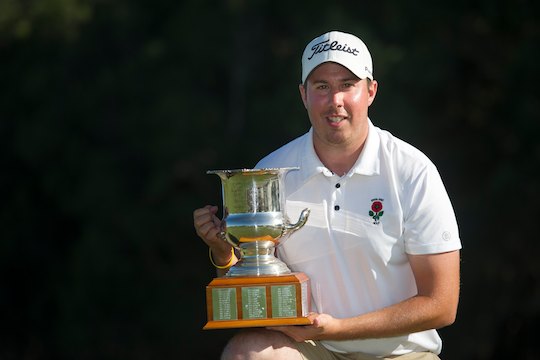 “Today I was able to get some good breaks. The birdie on the 17th gave me a two stroke buffer heading in, so that certainly help take some of the pressure off.”

The turning point for the championship came on the 401 metre par 4 15th where Evans drained a slippery eight footer for a birdie with Zunic three putting the same hole to walk off one behind the Englishman going down the 16th.

After Evans stiffed a 8 iron on the 364 metre 17th to two inches, the world number 34 closed the gate on the tournament, needing only a par on the last to secure victory.

“The shot in on seventeen was a corker,” said Evans.

“To walk up to the green and see just how close the ball had finished shocked me as I didn’t think it was going to be that close.”

The Lake Macquarie Amateur Championship is Evans’ second international victory, having won the 2013 Biarritz Cup in France. Add the 2012 South of England Amateur, and the 2013 Berkshire Trophy, Evans has collected a number of prized tournaments but is savouring today’s win as being something special.

“I came to Australia hoping to get a win,” said Evans.

“But the names on this trophy, like Mark Leishman, Peter O’Malley and Brett Rumford, just shows you the history and how good the winners have been. This is certainly an honour.”

Jarryd Felton’s efforts this week at Belmont also have been impressive, as was Zunic, with only his putter letting him down today.

Felton, along with good mate Curtis Luck from Western Australia, is touring NSW on their own bat and will compete in this week’s NSW Amateur starting Wednesday at Pennant Hills.

Already with three main amateur wins in 2013, including the Queensland Amateur Medal and Mandurah Open Amateur, Felton surely must be getting the attention of the golfing administrators for National Squad selection, especially given the recent results of a number of marque players over the last month.

According to the Golf Australia National Amateur Ranking, Zunic is the top-ranked amateur, yet is not in their National Squad. Felton also has been consistent and is another outsider. We will watch with interest if any changes occur following today’s results.

Another Lake Macquarie Amateur has transpired with another great winner. This event continues to produce classic finishes and full credit to Evans for a fine win on what was supposed to be ‘Australia Day’ not ‘England’s Day’.